One knee deep pool wade, 500 feet of walking and we found a suitable exit ramp! Sigh. Of. Relief.

We got out our map and water beta to figure out how much liquid we needed to pack out with us for the day’s overland travel. Water needs satisfied. Then we hiked up the steep grassy gully. Less than 10 minutes of effort and we were in a whole other world.

Goodbye towering cliffs of rhyolite, willows and deep pools with only partial views of the sky. Hello sagebrush sea, sightlines for miles, and plenty of cows. And distant rain clouds.

We headed over Rawhide Pocket to intersect the aqueduct road that’s noted as an ODT alternate for situations like ours. Dusty road walking for miles, sharing the rough jeep trail with tracks of coyotes, beetles, kangaroo rats, and of course cows.

The day stayed cool. Puffy jackets worn during our breakfast break. Rain jackets worn as a steady mist turned to rain. Walking out in the big wide open as it rains, when one is suspicious of thunderstorms (slight chance in the forecast), introduced me to a whole new concept of exposure. This country felt more open, exposed, isolated and remote than trips in the Grand Canyon or the backside of the Kaiparowits Plateau. This stretch of the Owyhee Uplands feels remote in ways similar to the Canadian Rockies or the BC Coast Range. High lonely country. It’s one thing to read the words in a brochure. It’s another thing to know it, because you are standing in the middle of the vast landscape.

Remote and stunningly beautiful! As we walked cross country over the volcanic plateau of Horse Hill the day’s storm cell moved on and blue skies with dramatic puffy clouds took its place. Now we could see out to Nevada’s snow capped Santa Rosa Mountains. Basin and Range peaks! Distant mountains that tell us we are on the cusp of transitioning ecoregions.

We’ll soon be going from the undulating plateaus and canyonlands of the Owyhee Uplands (that connect to the Snake River and greater Columbia River watershed) to Basin and Range country. Lands comprised of fault block mountains frosted in snow with melt waters that flow into the desert, never reaching the Pacific.

But we’re not leaving the plateau just yet, and this part of the Owyhee Uplands feels particularly special to me for its beauty, remoteness, and intact wildlife habitat. The Upper Louse Canyon vicinity is a focal area for greater sage-grouse recovery, while the species isn’t listed under the Endangered Species Act, its population has declined across the interior of western North America as the condition of its sagebrush habitat has declined. But here in Upper Louse Canyon the high quality of the habitat feels apparent to even an untrained eye. The land is thick with tall bunchgrasses, dried forbs, and sagebrush dancing in the wind. Upper Louse Canyon’s wet meadows and year-round flows are nearby. This area feels like it has the habitat components needed by sage grouse and apparently it has the highest number of sage grouse in Oregon. And it was here that we saw our first grouse hen of the trip!

Soon after the grouse sighting, we dropped off the gentle slopes of Horse Hill and returned to Louse Canyon. But this part of the canyon is a long ways away in miles and character from the start of the day. Broad open grassland, wet meadows, and a stream flowing along the 30-foot rock wall.

We set up camp in a low, protected spot as thunder rumbled. The rain started as we were soaking our dinners. It rains 7 out of 14 days on the ODT. 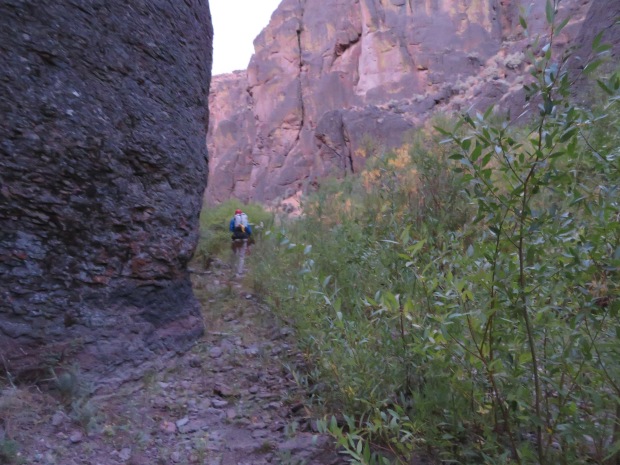 Time to find our way out of Louse Canyon.

Upstream from here we know the canyon narrows and swimming is certain, but in this part of the canyon the walls are low and the contours layback enough that exiting doesn’t require climbing.

Our escape portal! Just a few hundred feet up. 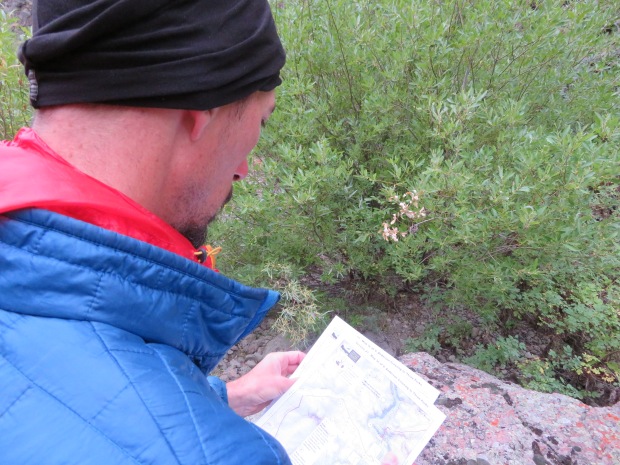 But leaving the water-rich canyon means we need to think ahead about hydration needs for the rest of the day.

Doing some route, water beta, and weather computations helps us decide on how much water we’ll load our packs with. 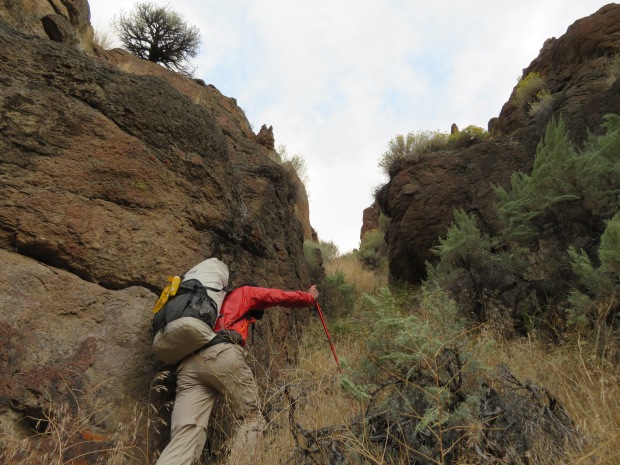 I can see cows up ahead! 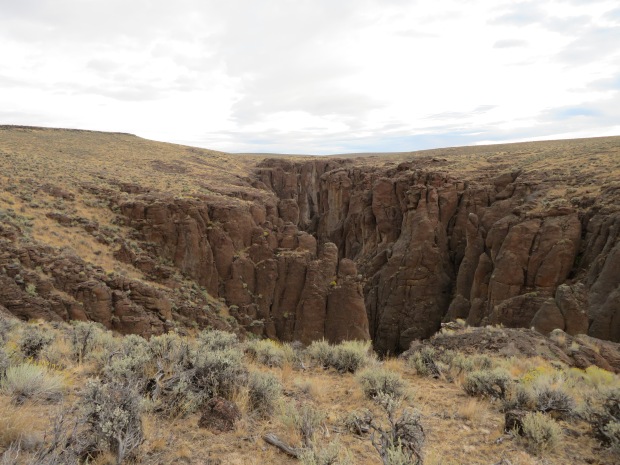 We spent the night down there. Louse Canyon looks a little narrow from up above. It also looks beautiful and mysterious. Offering an invitation for one to explore. But not today when it’s supposed to rain and be chilly for the next 2-3 days.

On top of Rawhide Pocket. It’s back to life in the sagebrush sea. 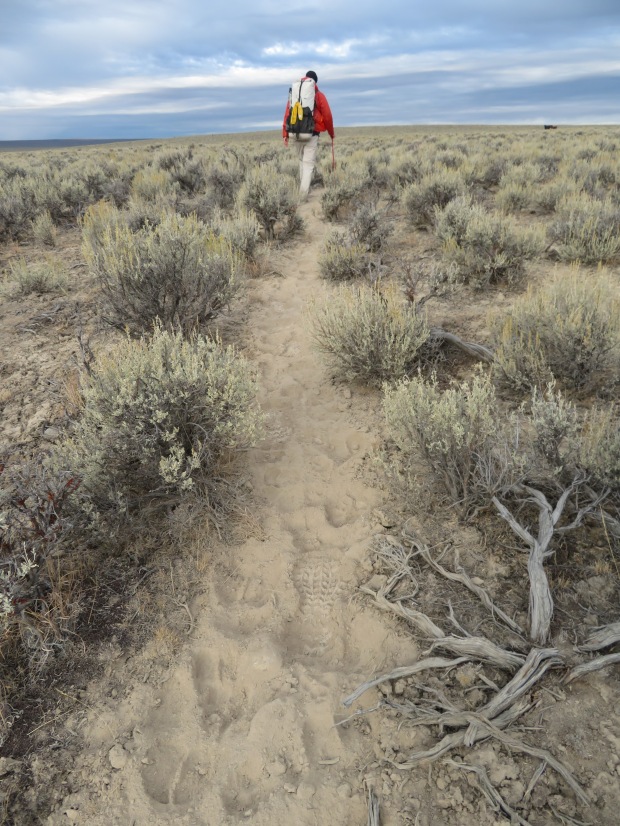 The cattle have built us a dusty trail in the volcanic soils.

My shoes aren’t pretty any more. They look like proper ODT footwear.

And back to road walking along an aqueduct.

And back to gates and barbed wire fences. Eventually we’ll run into the storm clouds ahead. Getting rained on for a few hours. 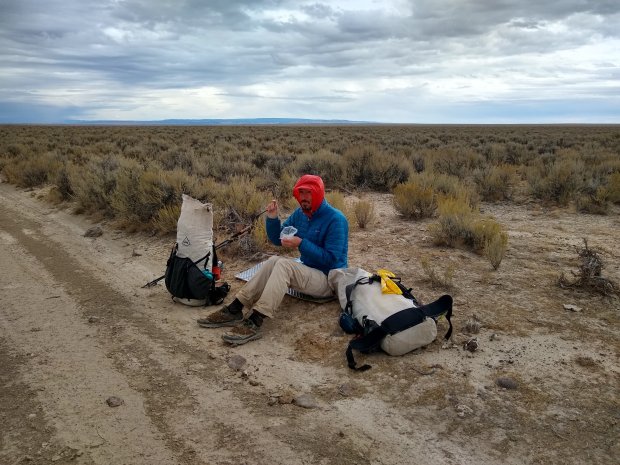 Bundled up for breakfast along the road.

Round one of rain ended and the sun dried us out through the clouds – a little. Cool all day long. Both of us are pretty glad that we aren’t taking swims today. 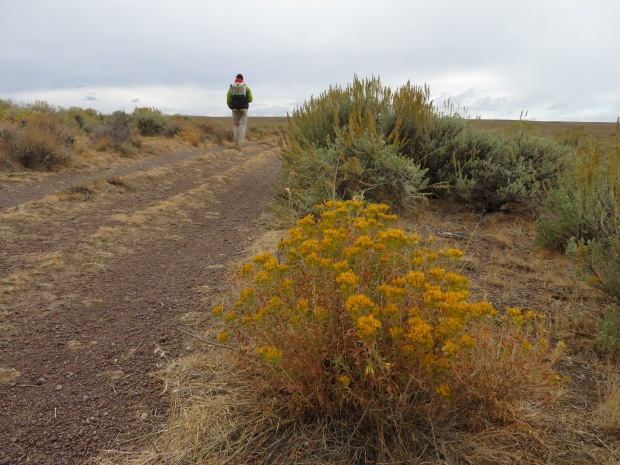 Cheery rabbitbrush on a gray day. 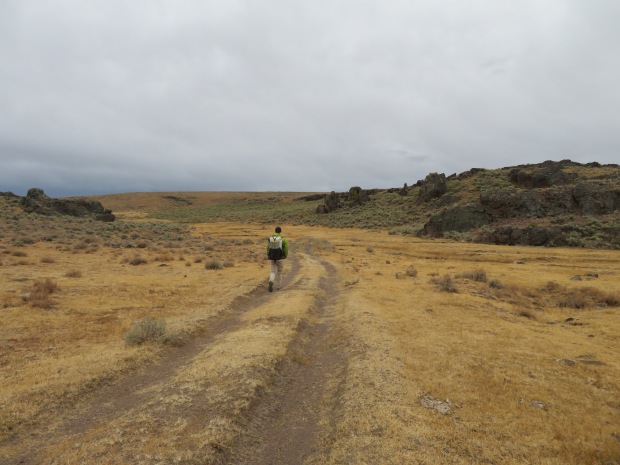 Taking a baring as we prepare to go cross country over the flats of Horse Hill. The peaks in the distance are part of the Santa Rosa Mountains of Nevada.

Aster and volcanic rock, oh the welded tuffs of the Owyhee Uplands.

The storm cell is moving on as we head west across the volcanic plateau. It’s beautiful country. The rolly rocks require us to pay attention to what’s beneath our feet as well as admire the clouds and distant mountains.

Was this rock shelter built inan attempt to get out of the wind?

Oh beautiful volcanic bunchgrass plain. While it was a bit tedious for us to go across these rolly rocks, we marveled at several pronghorn zooming across this plain… until that is, they reached this here barbed wire fence. The speeding pronghorn had to stop at the fence and take time to find a place to crawl under. These swift creatures can zoom race across uneven rocky terrain, but the trade off for such stability and speed is that they can’t leap over a fence like other ungulates. : Sometimes they get snagged and are injured on the barbed wire, or caught on it and even die. 😦  Barbed wire fences – you mostly make me so sad; accept when you’re used to protect riparian areas, and even then… 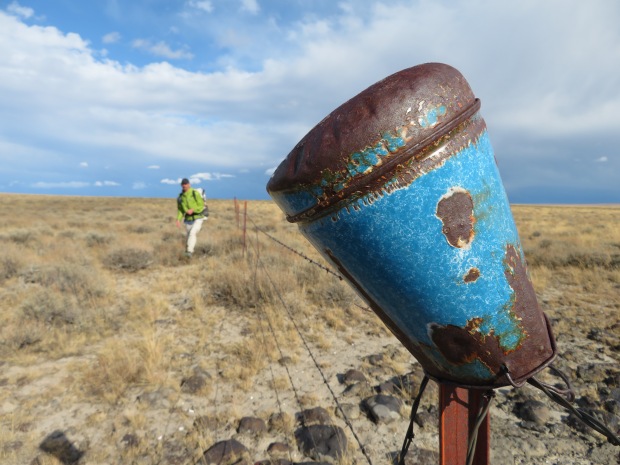 Who’s that over there in the lovely sagebrush and tall bunchgrasses? 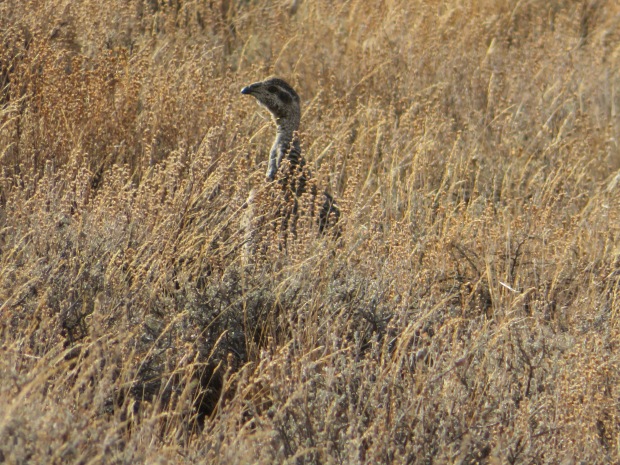 Gabriel looks out at upper Louse Canyon. Wet meadows and willows suggest that this area has qualities important for wildlife.

Upper Louse Canyon – home for the night is somewhere down there.

We set up camp early as some thunder rolled through and it started to rain. Photo by Gabriel Deal

As we’re getting ready to leave the magical Owyhee Country, there’s a fitting song by Ian Tyson about this special part of the sagebrush sea. I love it save for the idea of sagebrush fires (only have camp fires in fire pits in designated campsites) and feral horses. Quick aside, Ian Tyson lives in Alberta these days and is a friend and mentor to Corb Lund!

Oh, and some natural history basics. I couldn’t resist adding some footnotes: