Sometime around 2 am a rain cell came over us as we slept out under the stars. Our cowboy camp was getting wet in a hurry. We groggily snapped up the mid in a couple of minutes. A new experience to see stars in the sky but one dark rain cloud above us raining hard. (So far it rains 4 out of 5 days on the ODT.)

Getting up at 6:30, the stars were still out and Orion was in the eastern sky. A beautiful, peaceful morning in Owyhee Canyon. We picked up camp, admired the river a little more, and headed the half-mile back up to the old wagon road.

Time to get back to the uplands above the canyon. We had some cross country to do. It’s not hard moving through the landscape but there are all sorts of micro navigational to-do’s, not limited to but including:

All the while there’s the larger navigational to-do’s of follow your baring in an efficient manner.

We topped out on the rim and set out cross country. Around some areas the soil and vegetation looks much less disturbed. More bunchgrasses, shrubs, and biocrusts, the footing softer and less compacted. We felt a little guilty walking along through the small sagebrush plant community and kept our footsteps light. It feels wrong to add compaction to a place when so much of the landscape around is heavily impacted.

An hour or so later we were at out next landmark, a dried up cattle reservoir and we no longer felt the need to walk softly. The ground is hard, cheatgrass abounds, and cows have, well, cow-afied the area around the water tanks. We did a bit more cross country and when we were near point OC 123 on our maps, we remembered what Allgood said about taking a road vs going cross country along the rim. The rim is beautiful, but we didn’t want to make foot prints on sensitive ground and wanted our minds free to look at the scenery. We headed for the road walked by some neat lava vents/caves along the way and then cruised along meeting up with the ODT around OC 117.

Early afternoon and we were starting the 3.3 mile straight shot on a 100 degree baring across bunchgrass slopes to Jordan Creek Canyon. Miles of bunchgrass! Views to the north of Owyhee Butte – a black volcanic rock crown amid a field of golden grass, views in the distance of mountains, and irrigated crop lands (civilization is near!).

Somewhere in the afternoon walking we unspokenly decided to go for Rome. We had cell service and called Rome Station only to be told the cabins were full. Gabriel seemed disappointed and it was then that I noticed his limp and put together his sore foot was really bothering him. We kept our pace easy, but kept moving. Jack rabbits flushed ahead of us and we watched the black-tailed experts navigate the bunchgrass slaloms with ease.

At last we got to the the imposing looking basalt walls of Jordan Creek Canyon. Some 200 feet down below was the creek we needed to cross. It meandered through cattails, tule rushes, and teasels. From up above we knew the route would funnel us to a good descent route. Descending 50 or so feet, we took a break in the canyon shade to get ready for the final push to Rome.

In the 1860’s someone found gold and silver in Jordan Creek and that started a prospecting boom that spurred demand for beef, drawing cattlemen with their herds. In the 1880s, Basque shepherds with their flocks of sheep came to this here part of the world. Interesting to think about how the landscape has changed in a mere 150 years and continues to change. Oh how to navigate history?

But we wanted to get to Rome. So we focused on carefully stepping down the pea gravel slope (Gabriel with sun umbrella out), crossed the creek, pushed through cattails for about a minute of mucky schwacking (Cascade scramble ducks say schwack schwack!), and climbed up out of the canyon negotiating barbed wire and looking for rattlesnakes under the dusty sagebrush.

Onto to an old road, we got to Highway 95 around 7:15. Footsore and tired, we’d maybe make it to Rome Station before they closed. But if we missed it, well at least we’d pick up our resupply boxes first thing in the morning. We hoofed it along the road, thankfully with good shoulder. Semis roaring by, but a pretty sunset. Such contrast to the peaceful evening sounds of the last four nights. (River lapping at the shore, coyotes, crickets, rain on tent walls.)

Alas, we got to Rome Station around 8:03 and the little store was closed. We stumbled over to a camp site in the grass behind the store. Gabriel crashed pretty hard for about an hour sleeping on the picnic table with his food bag for a pillow and his sleeping bag to stay warm. I set up the tent and got things arranged. Eating dinner by moonlight, noting I still had 2-3 days of food (ugh), and just enough water if we’d had to dry camp before making town. Some things we are starting to dial in.

Tomorrow it’s supposed to rain hard and storm. Hopefully we can stay here in Rome under cover and rest up. But that’s for figuring out tomorrow.

Camp in Owyhee Canyon at dawn. Photo by Gabriel Deal

Crossing a land of cheatgrass and pepperweed near a cattle trough.

Unexpected water next to a dead steer with turkey vultures standing guard. We decided to pass on the bonus water at this cattle trough.

These little mace-like seed is a goathead. They make rolling under barbed wire fences a much more arduous process. The spines pierce through sun gloves and other clothes drawing blood and inflaming the skin. Apparently they can also pop car tires. So small, so powerful!

Cow-afied lands where the sagebrush was mowed, burned, or somehow mechanically cleared out. Cause you know this makes for “better” rangeland for cows. I question the use of this practice, it doesn’t seem like good stewardship to me.

Happy cross country walking above the canyon rim in areas with healthier vegetation, but where we need to be careful to tread lightly. 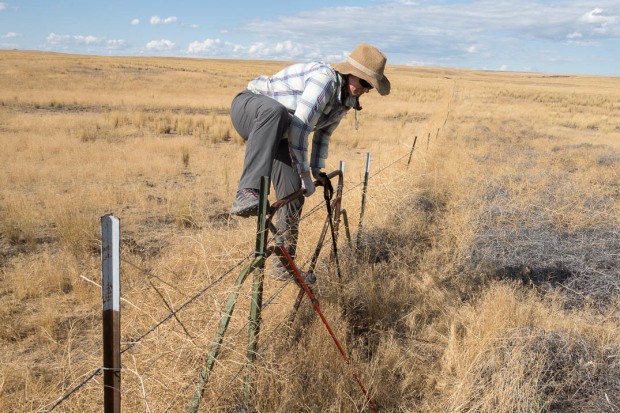 A fence challenge! There was so much tumble mustard blocking the lower part of the fence that we had to climb over. Make sure your tetanus shot is current before heading out on the ODT! Photo by Gabriel Deal

Gabriel walks along a 100 degree baring. 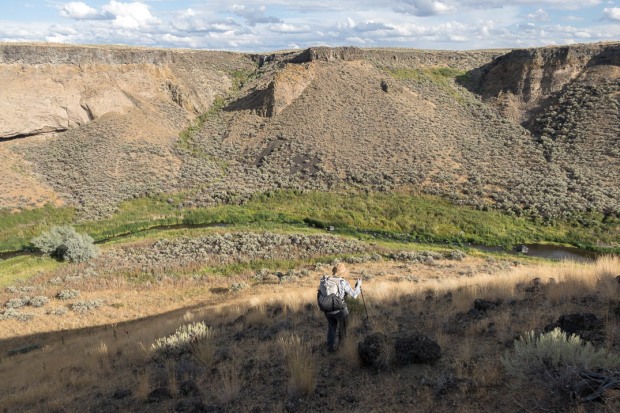 Descending down to Jordan Creek. Photo by Gabriel Deal

Good shoulder along US Route 95 aka the ION Highway. ION is Idaho-Oregon-Nevada. Photo by Gabriel Deal 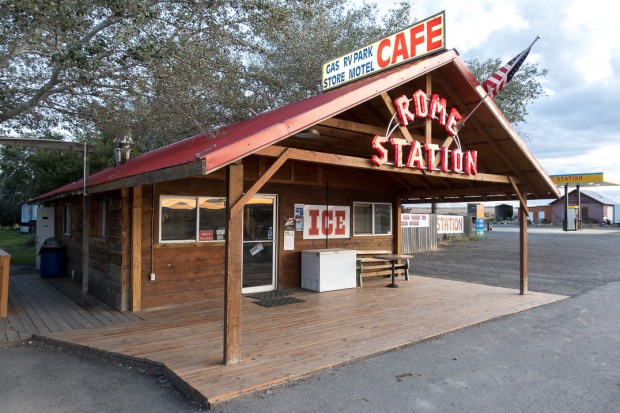 Made it to Rome! But just after closing.