Maybe you had to be “schwimming” along the shores of Lake Owyhee Reservoir for that to be funny, but the joke amused us. All day long.

Gabriel and his good friend/trip partner/colleague, Ian, coined the term on one of their brushy trips up some insignificant forested peak with 400 feet of prominence. (Oh the glory!) Schwack rhymes with quack and ducks are funny, so the joke has stuck. I learned about the Cascade scramble ducks this summer while the three of us were on a surprisingly minimally brushy trip in the North Cascades. Now I love Cascade scramble ducks!

Today we “schwam” and did some light “scwhacking”.

After a beautiful morning walk further down Juniper Gulch to Leslie Gulch all the way admiring tuff formations and imagining climbing routes (turns out there are some around) we got to the Slocom Creek Campground. A good spot to dry out our gear (it’s dewy in the desert), admire tuff formations, breakfast with a picnic table, and take the psychological weight of two days of trash out of our packs.

We chatted with some fellow west of the Cascades recreators who were enjoying the scenery and birding their way back to Portland. The first people we’ve seen since leaving Lake Owyhee State Park. Fun to converse with public lands enthusiasts and talk conservation ethics. One of them even knows our friend Wired. It’s a small world.

Then it was time for us to head down to the reservoir – Lake Owyhee – and assess whether we’d walk the shore, swim, or traverse high. There was one rock dyke we knew we’d have to swim around, but otherwise the going looked okay. We reconfigured our packs for a second time in one hour. By the time we’d got all of gear stored in dry bags and trash compactor bags the sun was shining on us and a swim sounded pretty nice.

At first it was a little intimidating to set off into the water to swim with our packs on our backs. But we started to get the hang of it. Stay close to the edge, keep the pack straps loose, when possible walk submerged in the water to enjoy the perks of buoyancy. Great blue herons and ospreys nearby seemed surprised at our presence, but the boaters fishing in the lake were unphased by hiking weirdos bobbing along the shore.

The water was a good temperature and the experience novel. It was so much fun! We kept saying, “Schwim, schwim!”

We called the walking in the lake “duck walking” and it was about as fast traveling as walking along the loose, rocky shore. As we got close to Spring Creek it was easy footing on the lake shore. A good thing too, as soon after we crossed the creek we started to see cows along the lakeshore and the water quality changed considerably along the banks (silty, poopy, smelly water that looked neon green in our polarized sunglasses).

Soon enough we were traveling overland to Willow Creek to begin our ascent back into the highlands. Along the way we saw a coyote, who took off when it saw us. Such beautiful animals! It was special to watch Coyote lope along up into the sage. I have much respect for such intelligent, family-minded, adaptable canids, and love to hear them sing. This coyote also had me thinking of Coyote and stories of the Northern Paiute about this influential trickster. (Which I first read in Legends of the Northern Paiute by Wilson Wewa.)

We filtered water from the lake from a less cow-afied spot and then headed up Willow Creek Canyon along cow and horse maintained trails.

We’ve decided to think of cows as fellow hikers. They are frequently the ODT trail builders and maintainers. They certainly made it easier to hike up Willow Creek Canyon! What’s described as cross country in our guide materials is practically a trail. The cows even “try to make soil” with their splats of manure to fill in eroded areas.

Some minor brush bashing in places where the cattle had differing opinions about routes, our first confirmed rattlesnake encounter (it let us know it was there with a stern rattle and then kindly slithered off the trail), and honeycomb tuff formations and we eventually ascended to join a pleasant road.

Pretty views along the way, we started cruising along the road and soon made it to the great water trough of note in ODT trip photos. I’ve been dreaming of getting to this trough for years! One of Powder River’s finest with cold, clear spring water flowing into a trough covered in duckweeds. The trough looks over grassy hills with lone junipers in the distance. It’s situated in a beautiful place. I was thrilled!

Gabriel noted that maybe Allgood was right, saying that the problem with those of us long distance hikers who keep wanting to walk is that “we’re all broken”. Spending our vacations hiking days on end with heavy packs, sitting in ditches, not showering for weeks, and getting excited about water in a cattle trough. One person’s best vacation is another person’s worst nightmare. I’m so grateful we are able walk to this trough!

With the last few days of warm temps and what we thought (in the moment) to be 30 miles to the next water, we loaded up. Gabriel with 7 liters, me with 9 litters. Ooof! 18 pounds more in the pack and still 5 days of food (heat had diminished my appetite and the WinCo bulk section had bulked up my food weight some more). Heavy packs and time to go up hill. We decided to think of it as resistance training for the possible 40-mile water carry and 6 days of food we’d have in the next section.

Uphill we went. Slow and steady to a beautiful cross country section taking a straight baring across grassy hills – though some spots a monoculture of medusahead rye – with hiker cows feeding nearby. We got to muddy, cow-afied Wild Rose Reservoir just before sunset and walked a few minutes more.

Camping amid sagebrush, we could hear coyotes singing, saw a jackrabbit hop about, and watched a light show of pink sunset colors while eating dinner. A peaceful night and ending to a satisfying day. This was the ODT I’d been dreaming of for years. 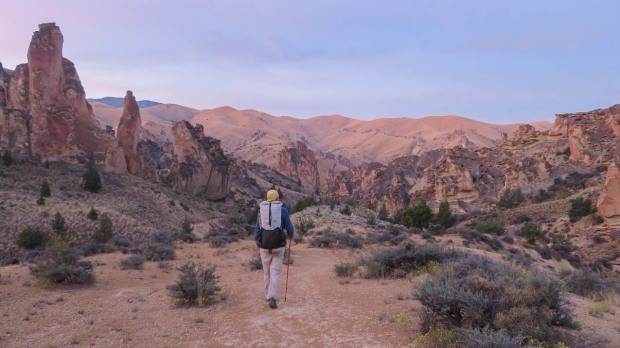 Morning in Juniper Gulch as we stroll out of camp.

Walking down the Leslie Gulch Road.

Our packs at the Slocom Creek Campground admiring the views while we sat at the picnic table eating breakfast. 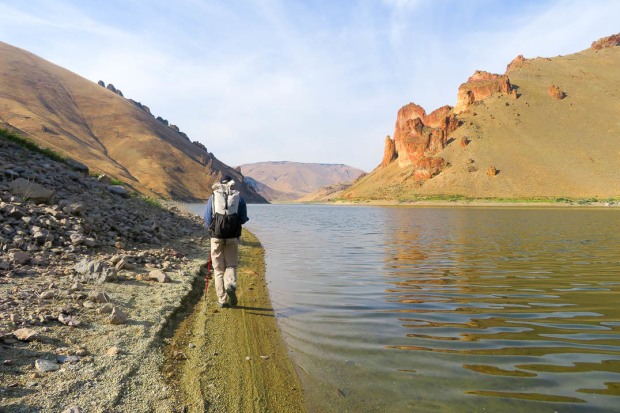 The shores of Lake Owyhee and the dyke (in shadows) we’ll swim around.

Duck walking along the shore of Lake Owyhee Reservoir. 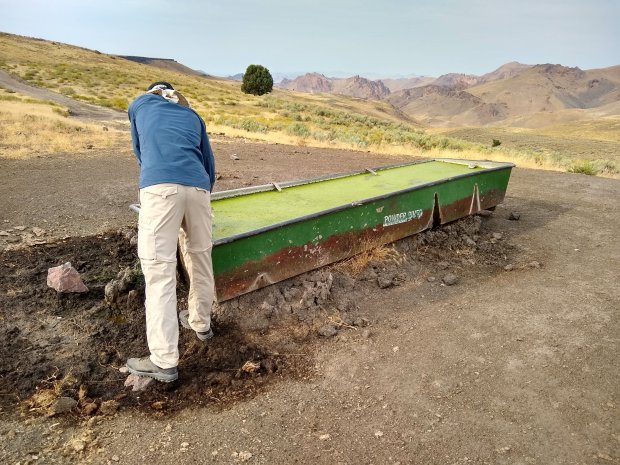 Gabriel getting water from *THE* water trough. Powder River’s finest.

Mukmuk and the duckweed-covered trough with the best water on the ODT.

Strolling across a field covered in an invasive monoculture of medusahead rye. Some factoids from Utah State University’s Great Basin invasive weeds page: The growth habit, life cycle, and adaptations of medusahead and cheatgrass are similar, and they often grow together. In some areas, medusahead out-competes cheatgrass to become the dominant vegetation. This has occurred on disturbed sites with clay soils that have high moisture-holding capacities.

Cowboy camp #2 of the trip and the stuff of ODT dreams. This little spot had plenty of cow-hoof print indentations that make for great water bottle holders. Photo by Gabriel Deal

Pictures from my camera – added to this post in April 2020.

Juniper Gulch in the morning.

Heading out from camp and on to explore more of Juniper Gulch. 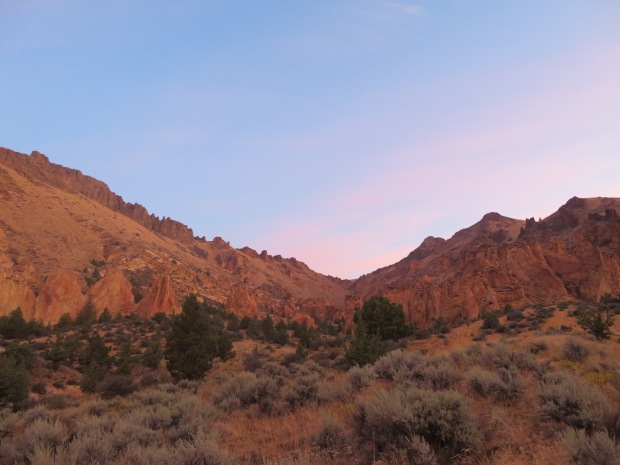 Looking back up the Gulch just before the sun peeks over the ridge.

Even the road in Leslie Gulch is beautiful! 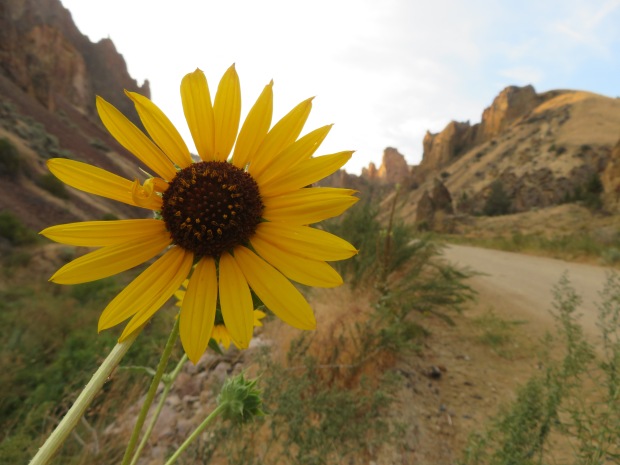 As one of my favorite musicians – Corb Lund – likes to sing: “Good Copenhagen is better than bad cocaine.” I’ll take his word for it though. Here’s a live version of the song: https://www.youtube.com/watch?v=uu-E8qB9sHI

Walking along the shores of the Owyhee River reservoir.

After the swimming section, the shores became easy walking. 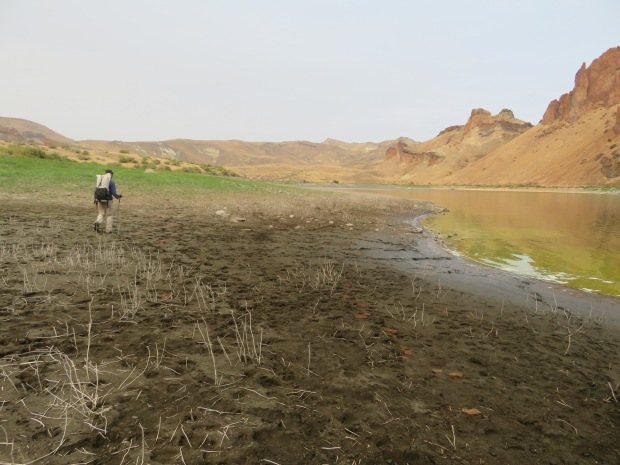 Cow “blessed” lake shores. Only when we walked by this did we realize all that we’d just waded and swam through… yuck. Could this have been a major contributor to Gabriel’s toe infection or my stomach parasite-thingy? We’ll never know, but it was still gunky looking water. 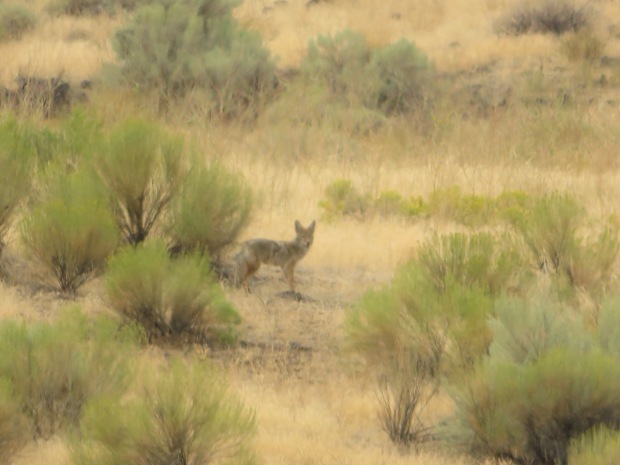 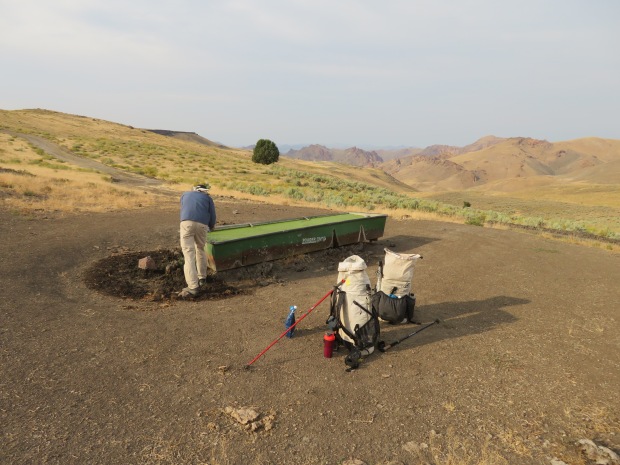 Stuff that ODT dreams are made of! One of Powder River’s finest with cold, clear spring water flowing into a trough covered in duckweeds. 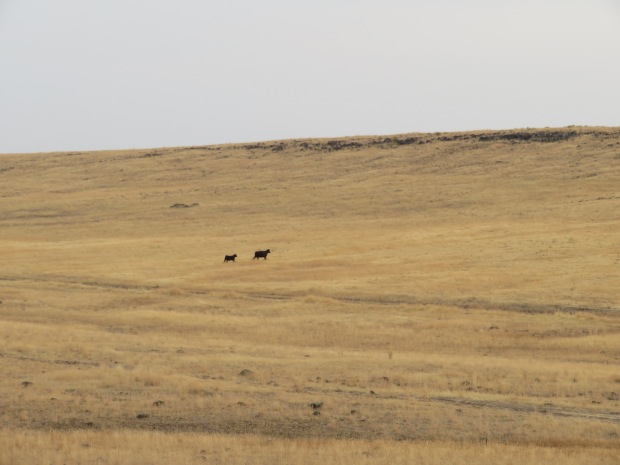 Cows around and abound on the straight traverse to Wild Rose Reservoir.

Taking some time to plan our line – Gabriel takes a baring. 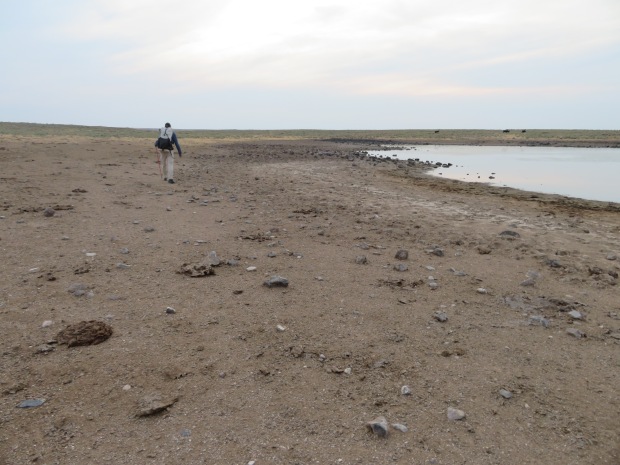 The shores of Wild Rose Reservoir.

Sunset at camp. Pink evening skies. The stuff that ODT dreams are made of.