Morning came quick. The bed had been so comfortable. But we go up, tired but motivated. Today was the exciting day we’d realize the dream of walking out our front door and walking back home after a good journey. And we had an adorable fluffy cat to return to.

We took a Lyft back to where we’d been picked up the night before and started walking down a ditch along the Issaquah Hobart Road. Ditch walking. Familiar reminder of parts of the CDT or even the Hayduke. We passed by the walls of high-end gated neighborhoods and horse estates and out to the more pastoral setting of May Valley Road along the south side of Squak Mountain.

An hour and half after we’d started walking we were back on trails going through forest in Squak Mountain State Park. Listening to juncos. Appreciating this close to people natural area. Squak Mountain is beautiful and feels far away from the hubub of urban life. Being a Saturday morning, we saw plenty of hikers and runners. Some were the same sorts of characters we observed near the Rattlesnake ledges, but not in nearly the same frequency. On the Squak trails there were hikers who reminded one another of good etiquette and right-of-way. I gave them extra smiles and felt a sigh of relief.

The network of Squak trails led us up and over to Cougar Mountain. Soon enough we were up Wilderness Peak and taking the network of trails out to the Red Town trailhead and over to the Coal Creek Natural Area – a Bellevue Park I used to ranger in once upon a summer. I loved seeing familiar trail signs and notices of bear and cougar in the area. Indeed having traveled the areas we’d just come from, I knew a bear or cougar could go from Blewett Pass to Coal Creek – all on public lands and mostly with good cover. (Now thriving in this densely peopled area would be another matter for such fantastic mega-fauna.)

We were hot and thirsty by early afternoon at the end of the Coal Creek trail. Being in urban environs, it was no longer a good idea to plunge our bottles into streams. Even if we treated the water, there are too many other things (toxins from car tires, brakes, exhaust, oil, fertilizers) that contaminate our urban creeks besides parasites – but there are things we can all do to help improve the creeks and Puget Sound. So as our route transitioned to asphalt we hoofed it over to nearby Factoria Mall for fruit and cold juice. Sitting outside of a Target with a carton of Tropicana was a new hiking experience. While not all that different from sitting outside of many a shop on long walks – the crowds and energy of the people were not the same as a storefront in Lordsburg, NM or Sierra City, CA. Readjustment. Re-entry begins.

We got onto the start of the Mountains to Sound Greenway I-90 trail and enjoyed all the interpretive information and (now) vintage signs that Bellevue Parks and the Greenway put up back in the late 90s, early 2000s. We walked right above the wetlands of Mercer Slough and made a side trip to Enatai Beach Park on the shore of Lake Washington. It was a hot summer afternoon so we took a break and quick dip in the lake. Enjoyed watching all the people paddling kayaks and standup paddle boards with their dogs. People were playing and having a good time – we could sit here all afternoon. But we didn’t stay long as the beach was crowded and the spot we’d sat in was apparently off limits according to the life guards that asked us to move. Sigh. Rules. We gotta keep moving anyway.

Onward across I-90 to Mercer Island, we started to see the fresh new Greenway trail signs along the bike path. They were good motivation on a hot afternoon. Our bodies were feeling the accumulated miles and the asphalt. We took a break under a tree at Aubrey Davis Park – more like I flopped on the ground – and watched an eastern gray squirrel with seemingly boundless energy scamper about. I want to be the squirrel! We filled water bottles at the park fountain and kept moving.

I started to look enviously at all the cyclists that were going by. Moving faster would mean a cooling breeze and we’d be home in an hour vs several more hours of walking. But walking is a way to take in more of our surroundings. And it was nice to see people enjoying the beautiful parks, playing games, picnicking, and boating. Walking was all good until we got to the I-90 floating bridge.

Maybe it’s because we hadn’t been close to cars much since the fourth day of the trip biking around Ellensburg, but going across I-90 was an affront to our systems. Seeing so many cars zooming faster than 60 miles per hour, without good safety buffers, changing lanes fast, slamming breaks. It really had us realizing how much of a video game bubble one is in when they are driving vs what it looks like from natural human speeds (2.5-3.5 mph). While the floating bridge is a unique part of the route, and lots of people bike, run, and walk it every day – I can’t say I’m a fan of being that close to fast moving vehicles and their exhaust. More readjustment and re-entry.

It was a relief to get off the bridge and go through the I-90 bike tunnel. Less noise and no scary cars. Plus the tunnel is a neat transition to the Mt. Baker neighborhood of Seattle. There’s so much public art in this area. Murals in the tunnel, sculptures, poetry, interactive art, and nice graffiti in the parks. I loved having the mental and sensory engagement of art after the numbness of the busy bridge.

We walked the full length of the Mountains to Sound Greenway Trail down to Holgate Avenue South. The path brought us back to the realities of non-trail life. Gritty, hard, urban living everywhere. Camps set up in the strips of land next to the highways (so much noise and pollution surely not good for the well-being of those residing here). Hearing people fighting. This wasn’t the bird song of the morning. Nor the mansions and horse estates. There is such contrast in a trail day.

I appreciated how lucky Gabriel and I are to be able to walk away from this grind – physically, mentally, financially. I was also reminded that for all my love of conservation efforts and the natural world, I can’t just give and support the environmental and recreation efforts I care about. I need to do my part for the social and humanitarian needs in my own city, country, and the world. These too need to be part of tithing commitments. Trails give perspective.

Making our way through the SODO neighborhood, I realized our route was missing one of the main attractions of the hike for me: the Mountains to Sound Greenway sign along Edgar Martinez Drive! We re-routed and backtracked a bit to include the Greenway sign I so often smile at on drives into town. I couldn’t help but remind Gabriel that one can walk from Blewett Pass all the way to here. I’d said that a lot already this day.

We walked back into downtown, onto the waterfront through the crowds of tourists, watched the sun set over the Sound along the Elliott Bay Trail as runners and bikers went by, and then we strolled a few more blocks to home.

Tomorrow we’ll pick up the caches and stashed gear. Our first tour of the Greenway Infinity Loop is complete. But we’ll continue to explore new places and return to favorites along the route in the coming weeks and years.

And now I know you can walk from Blewett Pass to Seattle. It’s all connected. It all goes. 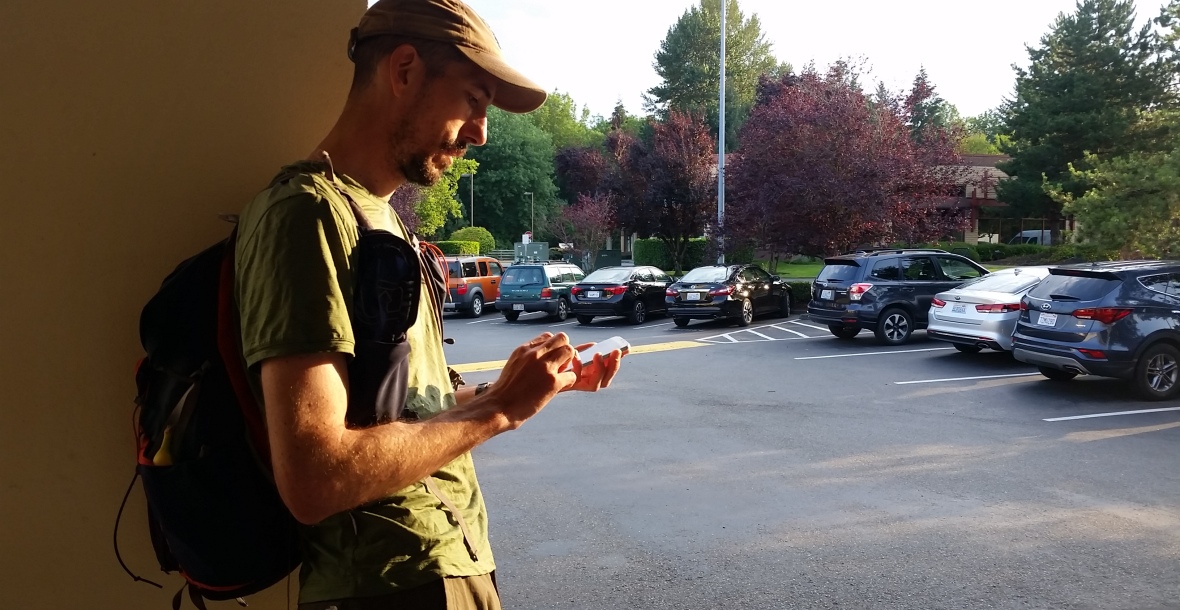 Getting a ride lined up.

Mukmuk feels happy to be back on a designated trails in the Mountains to Sound Greenway (vs. road walking).

Gabriel displaying some of his magic powers. 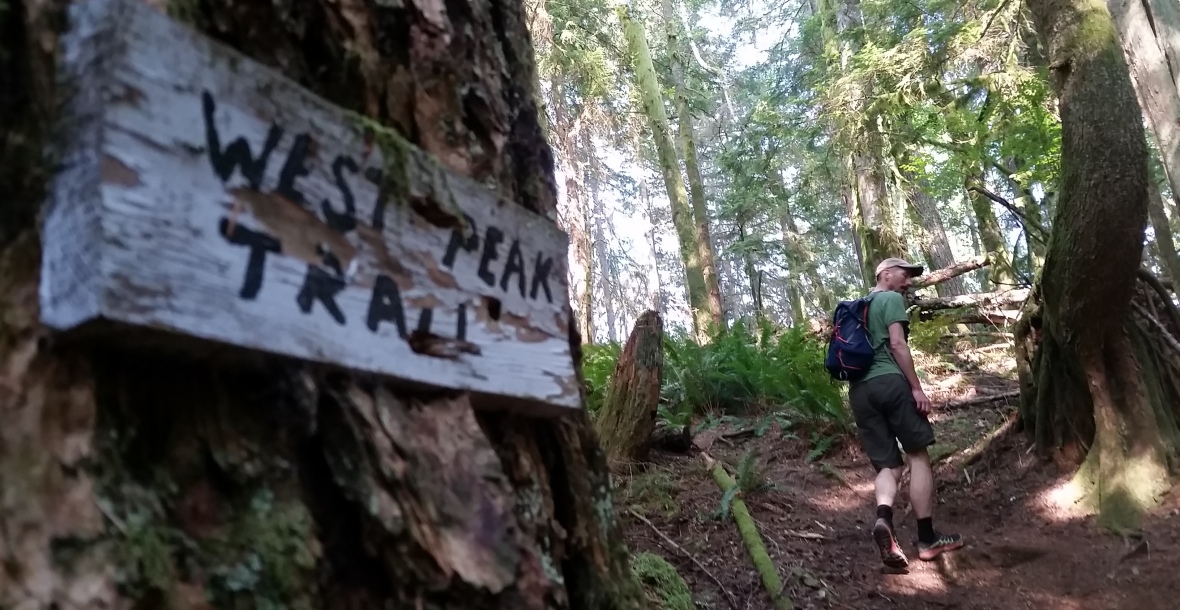 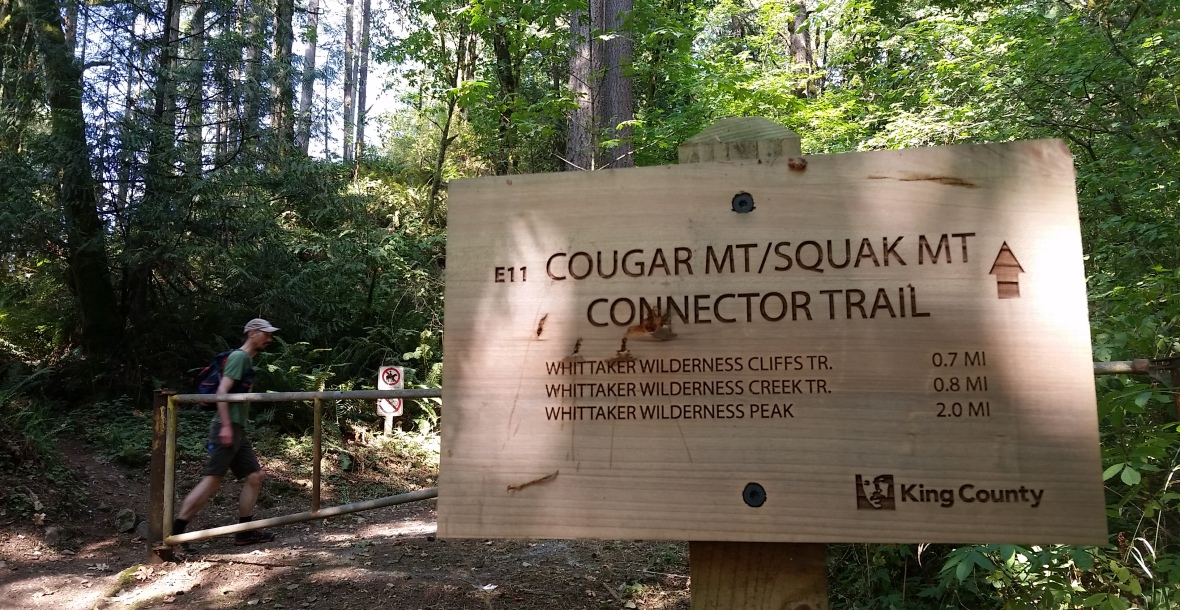 Fancy new sign welcoming us to Cougar Mountain. Two miles to a snack break on top of Wilderness Peak.

A shady oasis along the Coal Creek Natural Area trail. 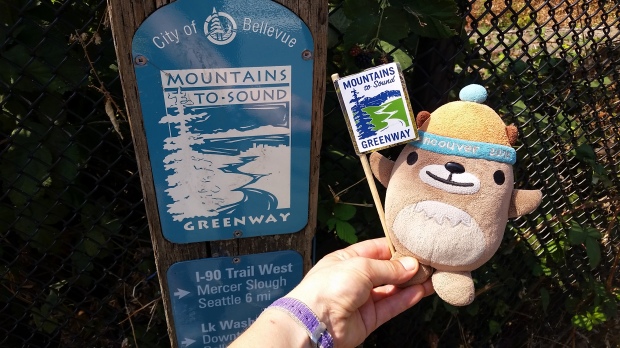 Vintage Mountains to Sound Greenway logo and the newest version.

We’re on route as we walk across Mercer Island.

Tired Marmot lounging in Aubrey Davis Park. Mukmuk on the other hand is ready to rally as he waves around his Greenway flag.

This is the sign I made us walk an extra mile to go and visit. It was so worth it!

Heading toward downtown. Gabriel is on a direct route to his office at Smith Tower.

Mukmuk and the Great Wheel. We didn’t stop and go for a ride.

Getting home at sunset along the Elliott Bay Trail and Olympic Sculpture Park.

Sunset over the Sound and the Olympics. A hazy night, but a peaceful one.