Brrr… we woke up to frozen tent walls, damp sleeping bags, and started walking with all our layers on. I was even wearing Gabriel’s bomber hat. Clear blue skies and snow on the ground. A pretty morning, we admired the big ponderosas and oak groves, but we weren’t so thrilled with straddling snow covered down trees. It stayed cold for the first four hours of walking. Oh well, we kept telling ourselves, in a day or so we’ll be along the Colorado River at the bottom of the Grand Canyon where it will be hot for most of the day.

Making it to Swamp Point we had beautiful views into the Grand Canyon. We took the North Bass Trail down to Teddy’s Cabin on the Muav Saddle. I’d been hoping that this would be a day where we’d see no other people (we’ve only had one other such day on the Hayduke), but as we were switch backing toward the cabin, Gabriel heard voices. Sure enough, there were folks at the cabin, Hank and Jan, from Kent, WA. They’d hiked down to the cabin and camped inside to stay out of last night’s rain (down here it was rain, it was snow up at 8,000 feet). So goes the hope of one more day without people, but they were nice folks to talk to.

After chatting a bit, Gabriel and I found a sunny spot to dry out our gear and have breakfast. Then it was time to let the brushbashing begin.

From Mauv Saddle we started out on the Hayduke route that descends Saddle Canyon. After about a mile of going down canyon, we climbed out and started skirting the eastern slopes of the canyon to ascend to the Supai sandstone layer of the Esplanade. This red sandstone layer that forms lovely slickrock benches and an inviting plateau in the western half of the Grand Canyon. But first we had to bushwhack up to the sandstone.

Upper Saddle Canyon was beautiful with oaks, big tooth maple, locust, larkspur and lupine. Walking about down the drainage felt like we were descending down into early summer. Pleasant save for the thorny locust. As we hiked up out of the drainage we started moving through manzanita, flowering currant, cliffrose, oaks, locust and pinyon pines. Prickly pear cactus and barrel cactus thrown in with cryptobiotic soil to tiptoe around. While not a wall of impassable vegetation, it was definitely resistance training. Slow going. And by the end of the day our shins were thrashed and we’d stopped to pull cactus spines out of our toes a couple times. The desert is pokey.

We contoured through several side canyons (Stina, Timp, and several smaller ones) and collected water in each drainage. Our limited route beta suggests these side canyons are usually dry, but we found water. Maybe it was yesterday’s rain and snow. Maybe it’s just the year. Maybe there is always a small trickle of water and people have different standards. Not sure, but we were happy to have it!

We also looked for Daybreaker’s dear friend Scoopy. But no luck. We hardly found sign of other people on the route, just a step or two every now and then. Scoopy, may you have grand adventures in the Canyon and get picked up by another explorer in the coming seasons.

Over the course of the afternoon, the weather shifted from clear blue sunny skies to dark and cloudy with distant storm cells moving across the canyon. Leery after yesterday, q\when it started to spit rain, we set up camp. We found a nice spot under a pinyon and juniper and put up the tent for the night. As we were eating dinner we could hear people on the rim of the Canyon, yelling and making a racket with what sounded like gun shots. A reminder that while we were down a thousand-plus feet, on an off trail route through wilderness, on top of the Rim there’s a road network less than a mile away with car camping and places for target practice.

So goes the first day of moderate flesh shedding brush. Tomorrow we need to figure out how to get up to the Rim. While this isn’t the storied trek through the plunge pools, it’s not road walking, and it’s not walking through a dangerous creek. We’ll take it.

Blue skies and a frosty morning. 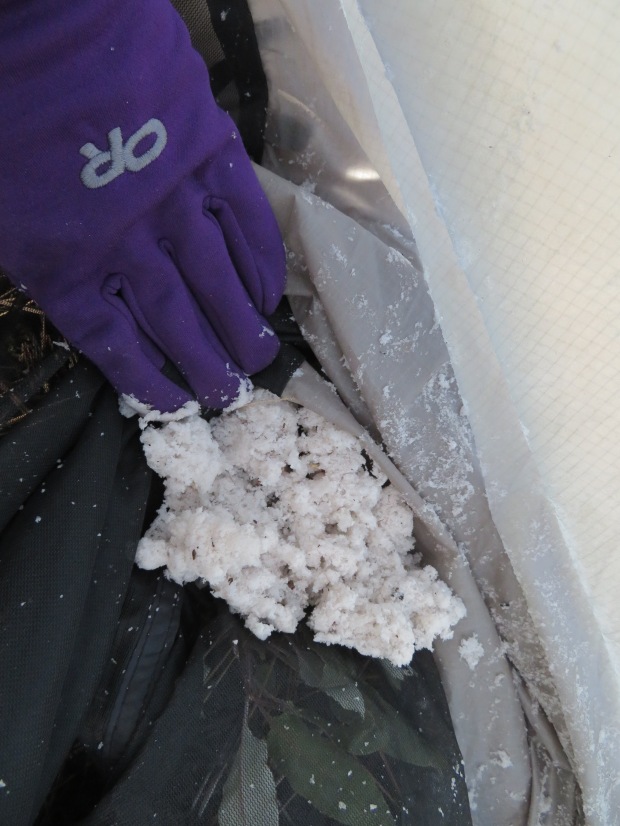 We cleared out a couple grapefruit-sized frost balls while drying out the tent. 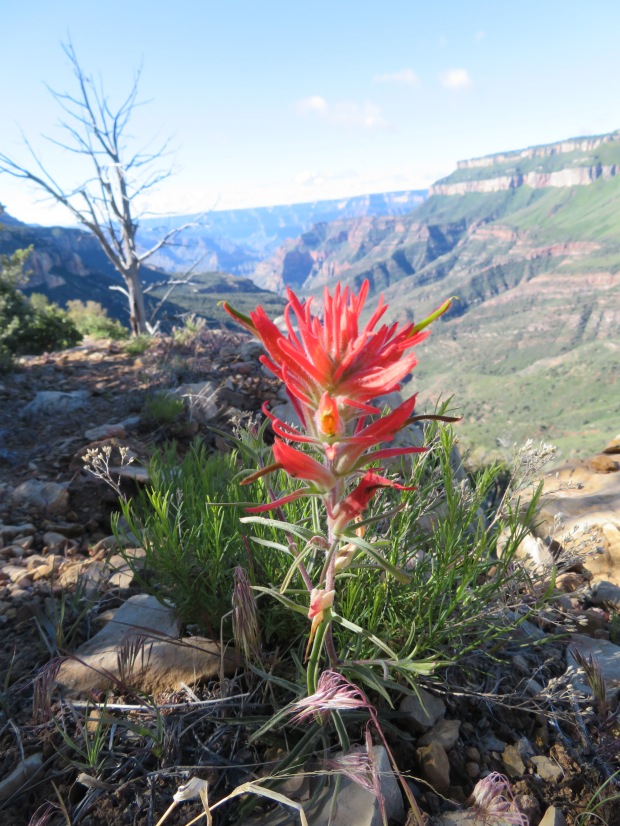 Paintbrush on the North Bass Trail.

Looking south across the Grand Canyon to the San Francisco Peaks and other volcanic domes of northern Arizona. 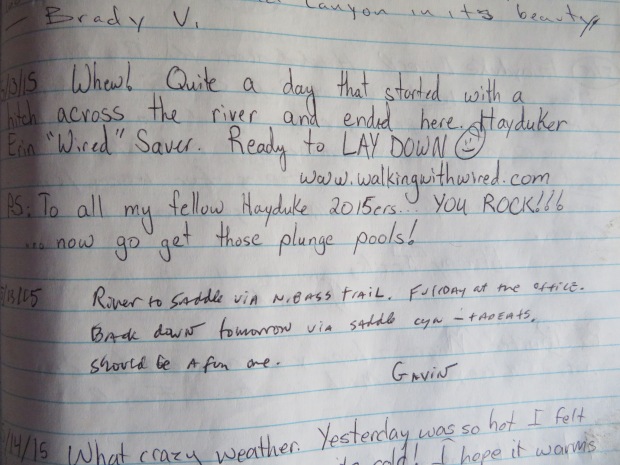 Fun to see friends in the register at the Roosevelt Cabin. Hi Wired! 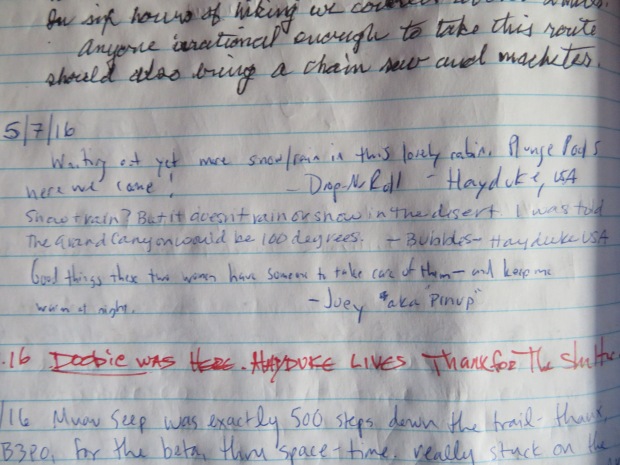 Just reading DNR and Bub’s entries makes me feel cold and wet. Yes Bubbles, the Grand Canyon can be 100 degrees… at the bottom!

Seeing Daybreaker in the register gives us the warm fuzzies. 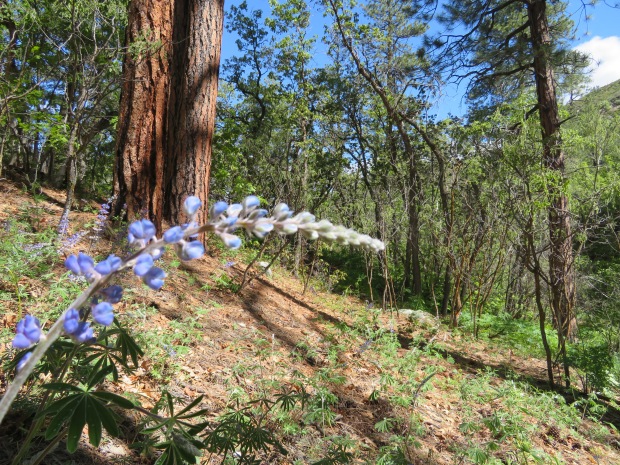 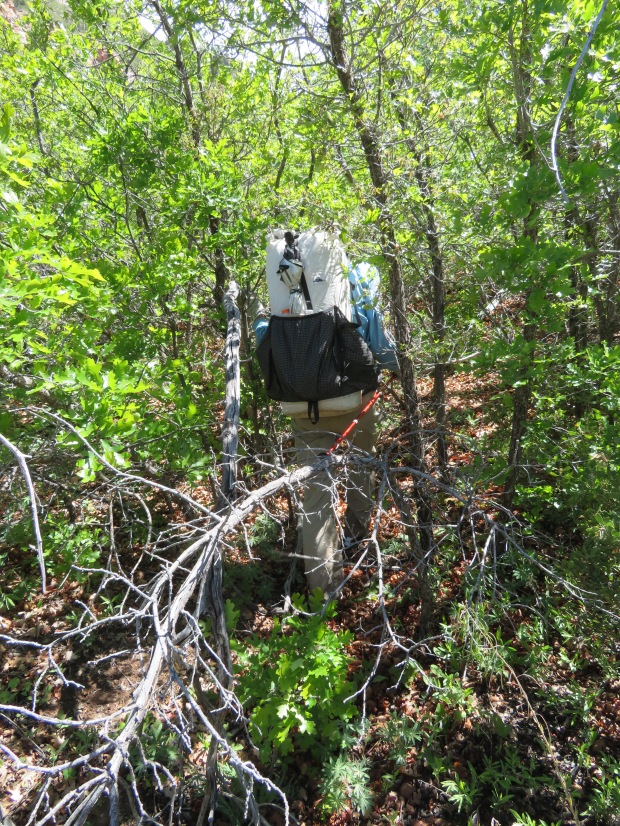 Gabriel pushes through a sea of manzanita.

This stretch of the Esplanade is very well vegetated. 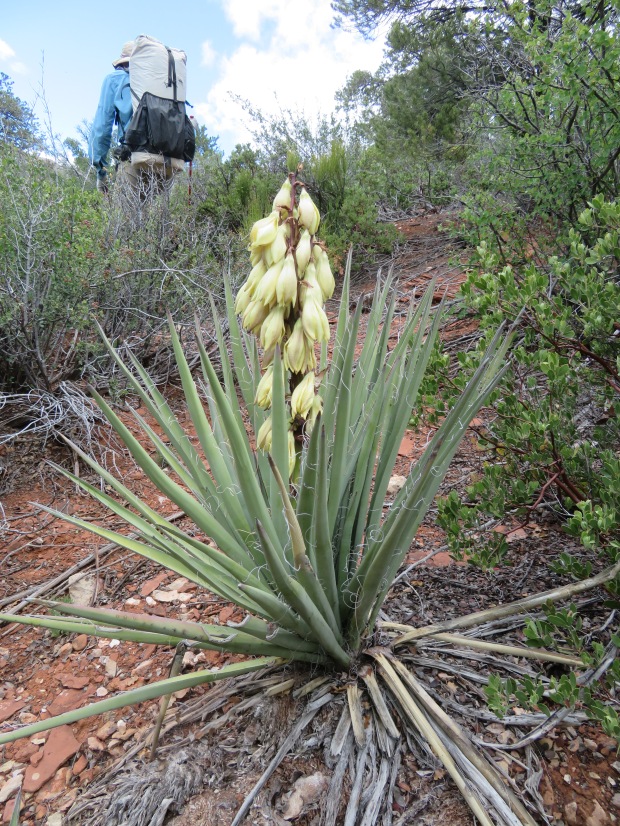 The yucca are especially sharp around here. We were both stabbed by several this afternoon.

Twice we found cairns along the route. 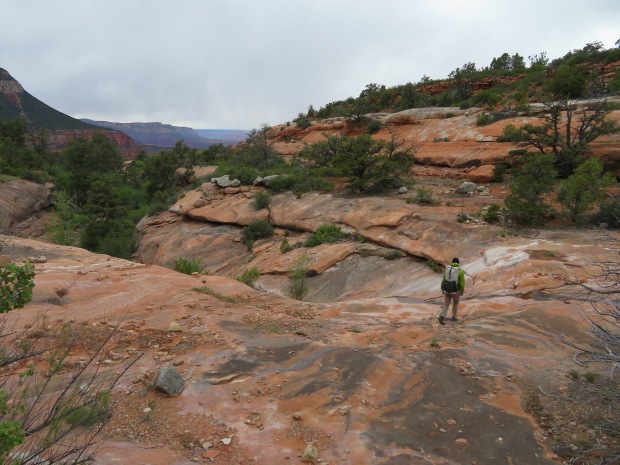 Contouring along a side canyon.

Rain and gray skies… had us thinking it was time to find camp.