A chilly, gray day with 20+ miles of road walking through spruce and pine forests. I’d figured this would be one of those connector days where the mind and beauty receptors recover from the sights of the day before and we’d cover a fair amount of ground.

Between feeling a little tired from the rim-to-rim haul and hurdling a bunch of blowdown along the road we weren’t in cruise mode. But the chilly temps also kept us moving along through the dense, damp forest. We stopped for a few snack breaks, watched some “beefalo” drink from a creek, checked out an old cabin, and went to a view spot looking west across the Grand Canyon. Water was flowing in every stream and in intermittent ditches. The guidebook and maps suggest this part of the plateau is dry, but it’s been a snowy winter. We’re glad to have the water, it makes carrying seven days of food easier.

Overall, it was feeling like a dull day. Shortly after asking Gabriel if this would be one of those unmemorable days (so different than the rest of the Hayduke), it started to hail hard. Then the thunder and lightning started to boom and flash. Then the snow started to come down.

I was getting a little wet and cold and concerned about finding a spot to camp. We wanted something with shelter, level ground, and trees that weren’t too tall (lightning), and that weren’t charred from one of the numerous fires that’s burned the plateau in the last 15 years. We set up camp under some spruce and pines and peaked out under the tent to see snow coming down hard… for mid-May.

Pretty to sneak a peek from the tent and watch the red bark of the ponderosa get coated in white fluffy snow. We were warm enough and dry in our tent. We took comfort in knowing that tomorrow we’d be dropping down into the canyon and would be much lower in elevation. So the cold was temporary.

I stayed up a little too late reading about Brighty’s adventures. Such a game little burrow!

GPS: used once; people sighted: many around the campground and facilities; roads: it was all roads.

Not the best forecast, but it could be worse. NWS forgot to include the hail, thunder, and lightning.

Walking the park lands of The Basin along the Kaibab Plateau. It started to hail a bit through here. 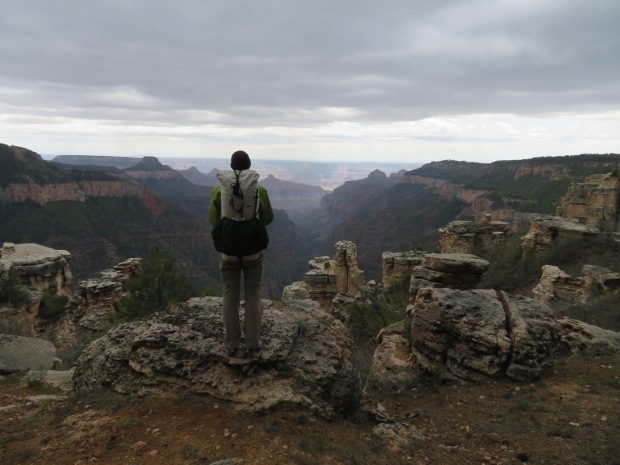 Looking into the Grand Canyon above Dragon Creek.

The blurry dark spot behind the aspen is a beefalo. Not native to the Kaibab Plateau and causing the park service and AZ fish and wildlife some challenges.

We found this here balloon. Gabriel is wishing Yana a happy unbirthday.

It really started to hail and rain around 5:30. We put up our umbrellas, rain jackets, and finally our rain pants to use this afternoon. I like how Gabriel’s jacket coordinates with the young aspen leaves. 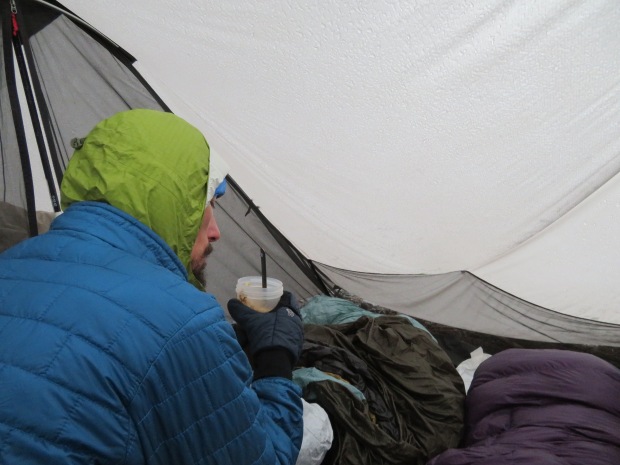 Dinner time in the tent. Watching snow fall on the roof.

Snow showers mixed with lightning. It got snowier than this! 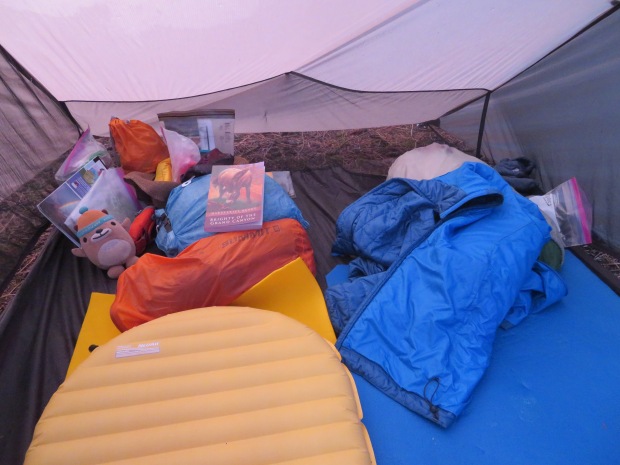 Mukmuk is just fine with burrowing into the tent an hour early as we read more about Brighty the burrow’s adventures in the Grand Canyon.

The snow flurries quit around 8:30 pm and we ended up having a nice, cold night.