After all the hurry in transitioning from Tanzania to last minute prep for the Hayduke and its setup, we haven’t had much real down time. So today, we didn’t set out to maximize miles. Instead we got a full night’s sleep and took care of errands in town.

Rather, I worked on getting this here blog somewhat going and Gabriel fetched coffee and veggie burritos, mailed off a package, and experimented with brewing motel coffee (a package for suggested for brewing four cups, makes about one decent strength cup of coffee).

The forecast also suggested rain for the morning, all the more justifying our plan to hang around town. The clouds built up, but the rain held off. No matter, chores finished enough by 10 am it was time to get walking.

We walked out of town and joined up with Kane Creek Road. Soon enough we were walking above the Colorado River. I kept thinking about how much our society asks of this river (dams it for water storage and electricity, allocation projects for several states and two countries, our recreational use) and all that it has done and continues to do in carving the formations that comprise the Colorado Plateau.

Here, near Moab the Colorado is such a powerful red and brown river, with what looks like plentiful water. But Glen Canyon dam isn’t too far away, it’ll be green soon. And this water we are walking by is not likely to reach its delta. The Colorado is the definition of an overworked river. We need to do better by it, for it, for us.

But I didn’t have much time to get deep into thought about this as we were dodging vehicles on the busy road. Lots of campers, RVs, ATVs, and mountain bikers heading out to start the weekend (Friday morning) or make the most of spring break (most cars were from Colorado). The less ideal road walking prompted us to go from taking the official Hayduke route up to Hurrah Pass with an anticipation of cool petroglyphs and onto a Li Brannfors’ alternate. The upshot, less traffic, more trail.

We had fun taking the trail route, watching some technical mountain biking, and then dropping onto a scrambly trail by Jackson Hole. A late afternoon of road walking had us starting to learn sandstone and rock layers, exploring old mine claims, dreaming of waffles, and checking out a disc golf course.

Our route contours below Hatch Point for more than 30 miles. Much of it easy road walking with beautiful views of cliffs, rock formations, occasional glimpses of the Colorado River, and in the distance – the Needles of Canyonlands NP.

On many trips we tend to hike late and settle for subpar camping – making much effort for our camp to be leave no trace. While we can’t always avoid situations with crummy camps, when possible on this trip we want to camp a little earlier in the evening. Shorter mileage goals and the landscape make this a little more feasible on the Hayduke.

Just as we were discussing this approach to camping, the rain clouds that had lingered since morning started sprinkling. With a dark rain cell in the distance, we knew the rain was coming. We looked at our maps and considered the terrain ahead (open and exposed, rolling country). Not much promise of a good camp. Time to put ideas into practice! The next wash we saw, we went up looking for a home for the night.

Gabriel found a nice spot by a pour off, out of the wind. But I am leery of such places on wet nights (even if conditions are not set up for flash floods). More rain coming down we looked up on a slickrock ledge and found an ideal mini amphitheater for a tent, mostly out of the wind and not at all in the wash!

We quickly got to work setting up the tent. Thanks to our Alpine Lakes High Route trip with Brett and Blake last August, our tent was ready for setup on a rock using rocks to string out the guy lines. (Thanks B and B for an awesome trip and campsite!!)

We ducked into the tent just as the rains stared pummeling the silnylon walls. Such timing! We settled in for dinner, starting with anti-malaria pills. Because of course most trips to Utah require such practices (actually they are a lingering requirement from Tanzania, but offer some side benefits for the first weeks on the Hayduke). And then we noticed the small stream coming right for our tent. Not a big deal, but no need to test the waterproofing of our floor. We quickly applied the knowledge of our Kilimanjaro tent setter, Jackson, and dug/sculpted trenches around the tent. The water then flowed around our little gray home and we had a peaceful night.

I should note, we were camping on slickrock and the trenching was moving around debris on top of the slickrock. We weren’t digging into soil.

GPS: used twice to make sure we were going down the right route of Jackson Hole; people sighted: many in town, three hikers, eight strong mountain bikers; roads: it was almost all roads! Except for some really cool trail. 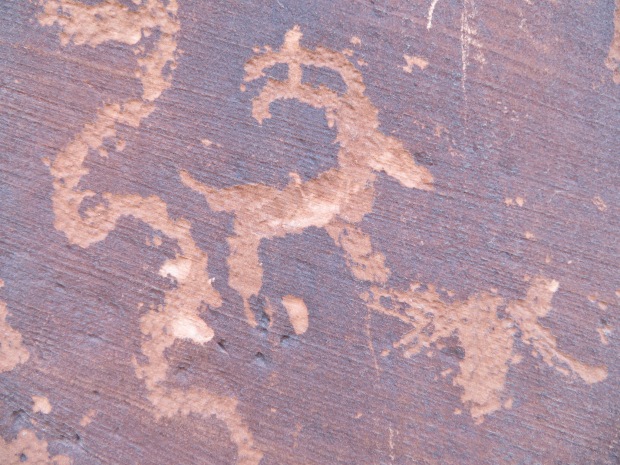 Bighorn sheep petroglyph in Moonflower Canyon along the side of Kane Creek Road. A surprising perk of the busy road!

Mountain biker along Jackson Trail and the mighty Colorado River below. At least here, it is red and brown like its name. All this water – none of it reaches the sea.

Utah penstemon along the trail. 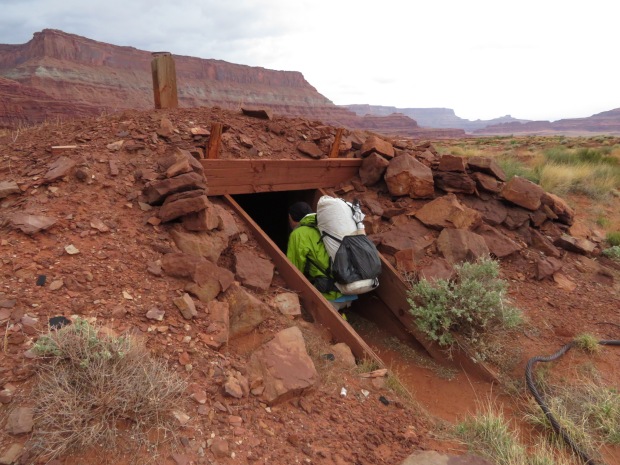 Gabriel checking out the mine below Hatch Point Mesa.

Disc golf anyone? This course had us thinking of Mr. Fox and our friend Miki!

Outside the tent, a little stream is starting to trickle our way. 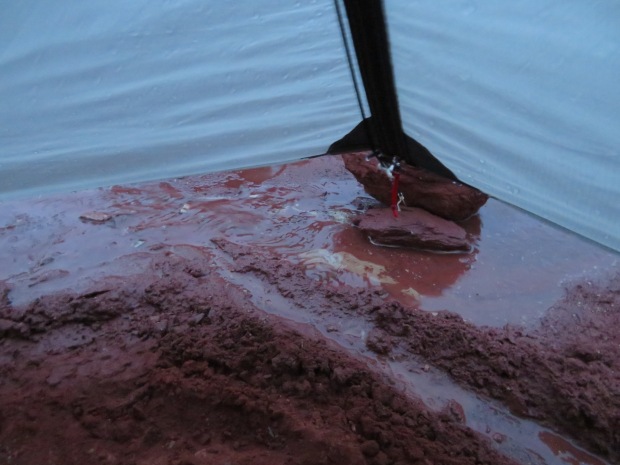 The trenches are doing their job. Thanks for teaching us Jackson!