In brief: A day crossing back and forth across the Teanaway and Ingalls divide, admiring wildflowers and familiar mountains, and a reminder that marmots should not sit out in the full sun when it’s hot and they are somewhat calorie deprived.

Long version: Waking up to the smell of firs and spruce and chatter of bird talk in the cool of the morning is a lovely way to start the day. We slept in until 6-something, after noting that the last six days and 250-some miles had us feeling tired. Once out of camp, we weren’t hustling up the ridge either. There was just too much to take in at “cover beautiful ground pace” so we meandered up to the top of Freedom Peak.

The clear morning offered expansive views looking south to the high volcanoes of Adams and Rainier, the massive wall of the Stuart Range just to the north, and toward the west the red formations of the Teanaway Mountains – a mix of volcanic, sedimentary, oceanic (serpentine) and sandstone formations. Abundant wildflowers including penstemons, buckwheats, harebell, coyote mountain mint, Columbia lewisa, yellow columbine, and snow dwarf primrose (endemic to the region). I was bending down to greet flowers at nearly every step. Eventually we reached our breakfast summit and enjoyed the views with a light refreshing breeze.

Descending from Freedom to Navaho Pass brought us to the eastern edge of what I consider the “classic Teanaway” that extends from Navaho over to Jolly Mountain further west. This area is a favorite of ours for late season larch trips, snowshoe outings, and scrambles anytime the weather on the westside of the Cascades calls for damp times. The Teanaway befits its name, meaning drying place – both in vegetation communities and traditional uses. It has long been an important fishing and fish drying place, and home to the Yakima, Cayous, Nez Perce, and peoples of the interior plateau.

At Navaho Pass we climbed up toward the summit of Navaho and rejoined the County Line Trail. Going up Navaho was tempting, it’s the highest peak in the Teanaway drainage, but we’d never traveled the trail on its lower slopes and found it satisfying to explore. Most of the mountains we walked by today are ones we’ve been up (repeatedly) over the years. So as we hiked by familiar summits, I found myself thinking of those trips and the friends we shared them with. Recalling fond memories of wildlife class outings to count deer and elk scat, Springtime Comes to the Cascades hikes in grad school, UW Climbing Club trips to see larch, Mounties friends trips, PCT reunion trips, NW Hikers trips – the Teanaway is a place that brings together so many favorite things and memories.

I was a prosy marmot all morning and early afternoon walking up and down passes, in and out of the headwaters of the Stafford, Hardscrabble, Fourth of July basins on either side of the Teanaway-Ingalls divide. Admiring flowers. Whistling over the delight of seeing and hearing Cascade golden mantle ground squirrels, pikas, and marmots. Such a glorious day!

But I was also a wee bit of a hungry marmot. I’d misread our planning spreadsheet back home when I packed for this stretch and thought it was 1.8 days between caches (turns out we’d estimated 1.8 days between water sources). So I’d only packed one dinner and fewer snacks, because I was trying to get better about not carrying excessive amounts of food. Turns out, this leg is about 2.6 days. Hmmm… what’s left in my food bag? I’d realized this discrepancy last night while looking at the maps and making dinner. So I’d dialed back on my meals and snacks to make sure I had enough to get me to our next cache. This approach probably would have worked fine and this would have been a non-issue if it wasn’t for the siren call of a beautiful break spot.

In the mid-afternoon we descended from the pass by Volcanic Neck to a stunning camp site with upfront views of the Stuart Range. An awesome spot, so beautiful. I hesitated for a moment, but looking at the peaks – couldn’t resist a break. The pause had been due to the full sun, warmth of the day, and lack of a breeze. Taking breaks in the sun is not our norm. But this one time, it just felt too pretty NOT to. About 30 minutes later, I knew that had been a mistake. With the combination of heat, 6 previous days of activity, rationing food, and a break in the sun – I’d set myself up for a tough afternoon.

Gone was the prosy marmot in love with every flower, admiring the trail, and thinking happy thoughts of mountains shared with friends. I was replaced with a stumbling heap of despair. Wiped out, tripping on rocks and falling down. Confused and not thinking logically. Upset stomach. Poor Gabriel – he had to put with me – and the usual tricks of extra treats or pointing out big trees and critters weren’t perking me up. It took a lot longer than expected, but we finally got down to the Iron Peak trailhead and realized the best option for both of us was to call it a day and camp at the DeRoux campground. This ended up being a really good idea, as 30 minutes later a group of dirt bikers headed up the trail we would have been on (shared use, totally legit for motorcycles, horses, and walkers to all use it). But the idea of inhaling dirt bike dust and exhaust could have dampened morale even more.

We set up camp. Got water from the North Fork of the Teanaway. Assessed our food – between the two of us we’re good to go. I took in a lot more fluids and electrolytes, had some salty snacks and fatty calories, and started to recover. As my brain function returned to normal – I realized I’d been exhibiting symptoms of heat exhaustion. I went to bed early, already feeling much better. Lesson learned – don’t let this marmot sit out in the hot sun on a hot day – even if the views are gorgeous. 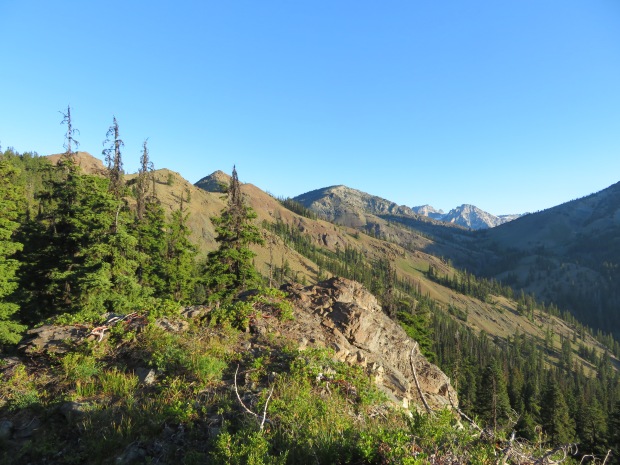 We are just three ridge bumps away from breakfast on Freedmom Peak. Navaho and the Enchantments (Dragontail and Little Annapurna) in the background and shadows on the south slope of Three Brothers. 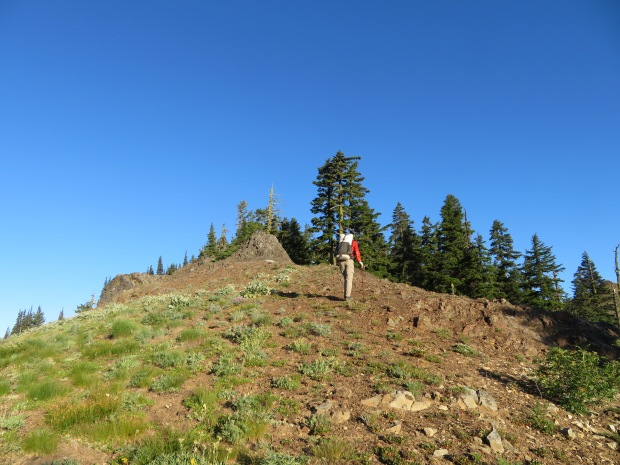 Easy ridge rambling to Freedom. We avoid stepping on plants, lichens, and cryptobiotic soil as much as possible – opting to place our feet on the more durable surfaces of bare rocks and gravel. This takes a few seconds more to cover ground than just striding across but we don’t want to harm the amazing beings that call this place home. 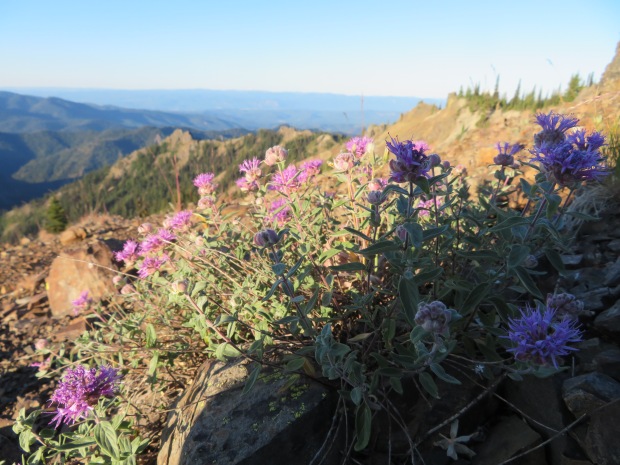 Mountain coyote mint (Monardella odoratissima) grows in bunches and abundantly on the slopes of Freedom. Often we see bees and butterflies amid the flowers, perhaps why it’s also called mountain beebalm. 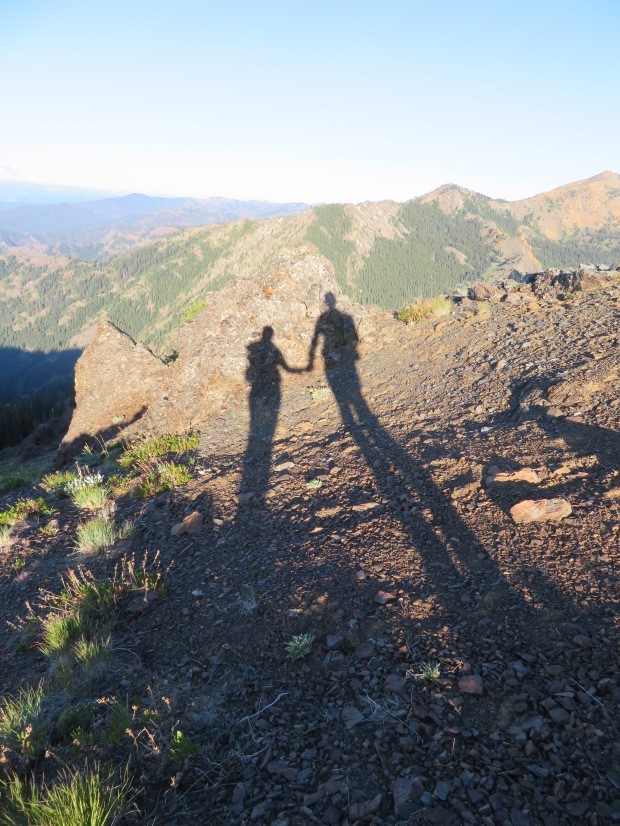 Even in shadow land, Gabriel is taller than me. 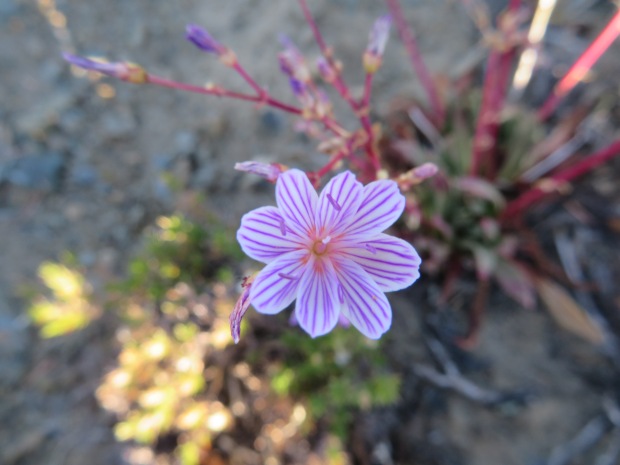 Columbia lewisia amid the rock gardens. 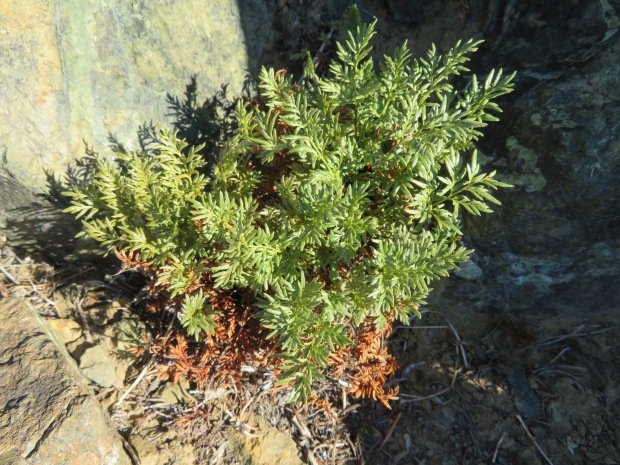 We found lush outcrops of parsley ferns (or some sort of Cryptogramma sp) growing among the rock crevices of Freedom. I’m working on identifying rock ferns this year. 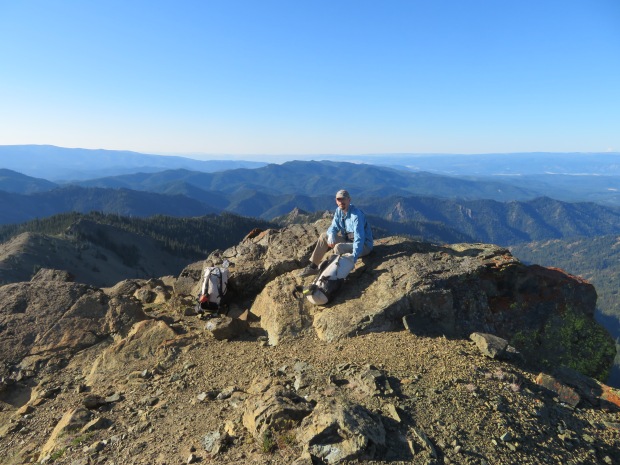 Gabriel at our Freedom Peak breakfast spot. The Teanaway foothills and Upper Kittitas Valley below. Adams just rises over the hills, reminding us of the vast dominion of Klickitat. Freedom Peak, 6,442′ is also known as Little Navaho. 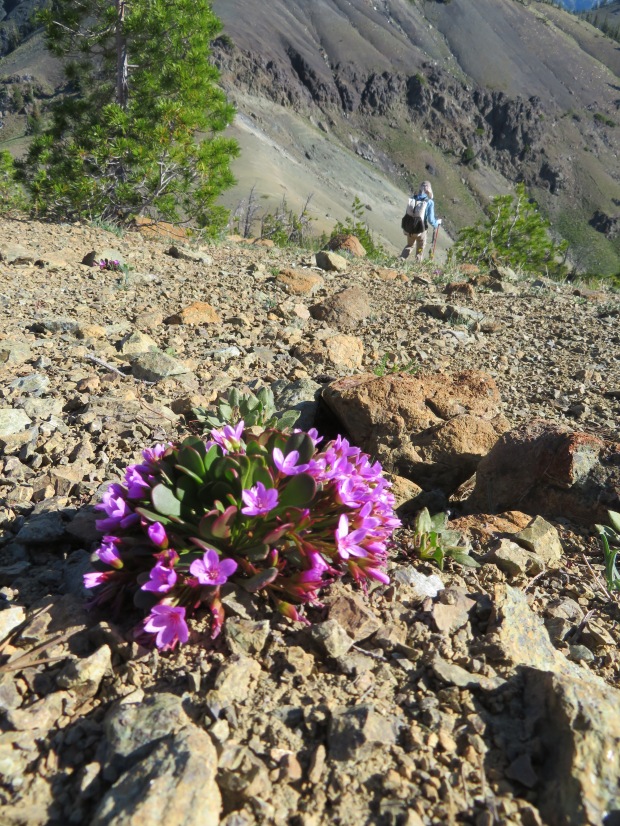 Descending from Freedom, there were small gardens (aka mat-forming perennial herbs) of flowers scattered about the rock outcrops and graveled slopes. This snow drawf primrose (Douglasia nivalis) growing amid serpentine is a lovely flower we encounter often in the Teanaway and on the hillsides around Wenatchee. A familiar flower friend found only in the eastern Cascades and Wenatchee Mountains. 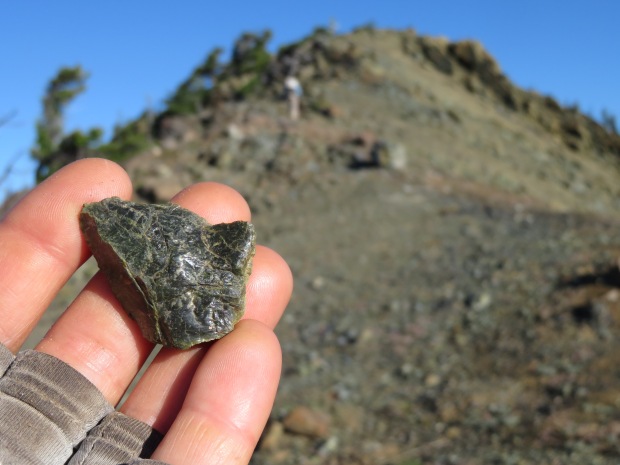 Serpentine rocks, confirmation we are in the Teanaway. 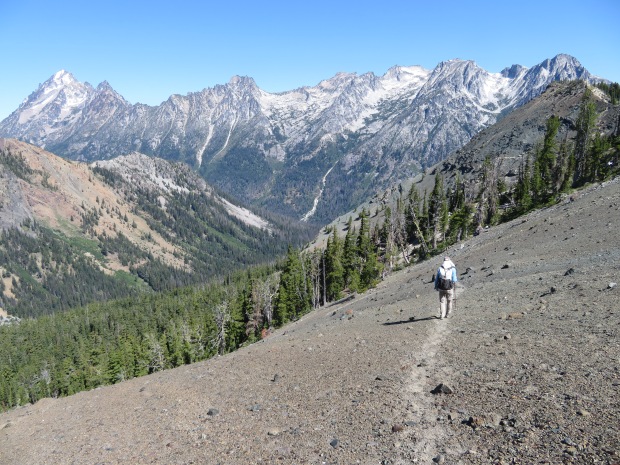 From the shoulder of Earl Peak, we descended lunar-esque slopes of serpentine and volcanic gravels into the Ingalls Creek drainage. Stuart, Sherpa, Agrognaut, Colchuck, Dragontail, Little Annapurna, and Enchantment Peaks dominate the view. 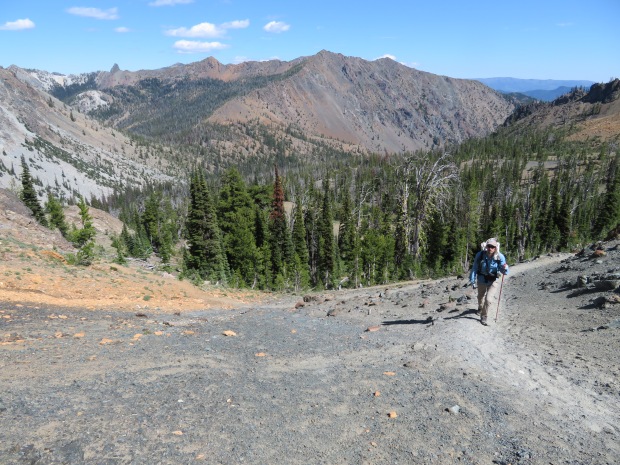 Bean Peak and Volcanic Neck are in the distance as we hike up to the pass between Iron and Genes Peak. 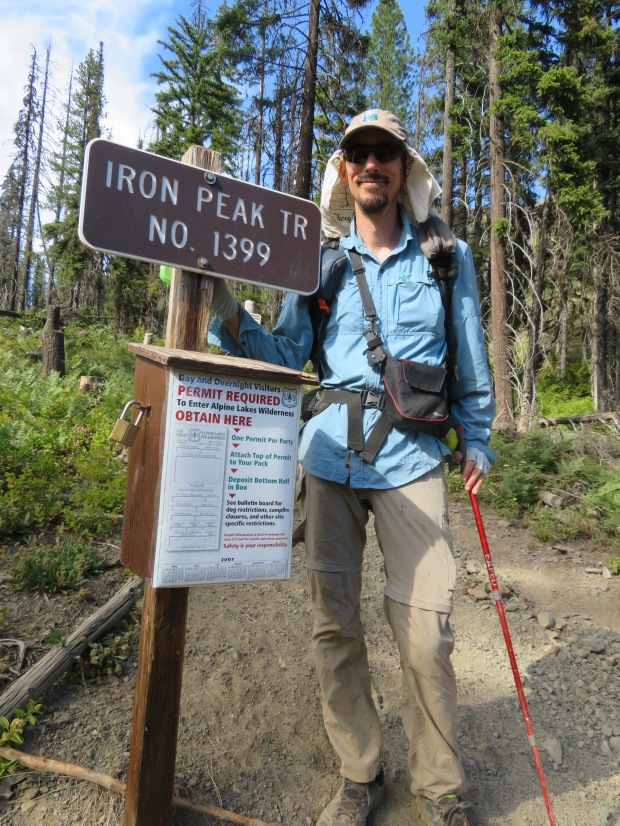 We made it to the warm and dusty trailhead of Iron Peak in the late afternoon. 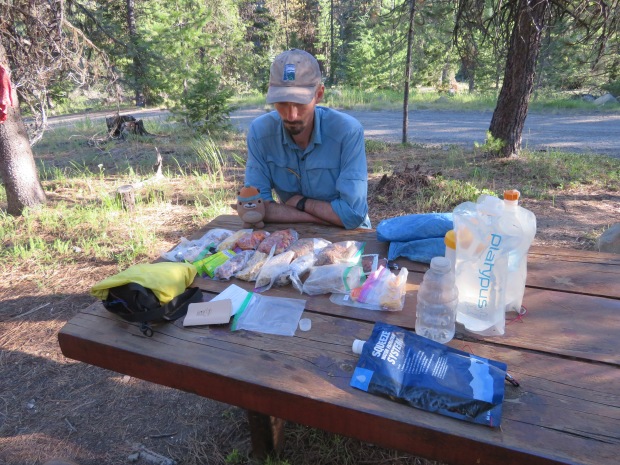 At our camp site at the De Roux campground we assessed our food for the next 24 hours. Turns out – between the two of us – it’s not a “dire situation” after all. Though Mukmuk can be a ravenous marmot, there’s plenty of kale bars, nuts, and salty things to get him to our Paris Creek cache.