Today we biked from Cle Elum to Ellensburg and to the southern and eastern-most points of the Mountains to Sounds Greenway. It started off as a beautiful day in the cool of morning with many sightings of significance and a wonderful tailwind. It finished off with us humbled by a headwind and grateful to straggle back into town to enjoy the company of our friends, Steve and Anita.

From Cle Elum the Palouse to Cascades trail follows the Yakima River to around Thorp and then enters the Kittitas Valley. The first 18 or so miles of the day were especially scenic, the route winding through andesite cliffs with views up to grassy benches, and the sparkling waters of the Yakima River.

Alongside the trail, we rolled by hardhack spirea, fireweed and oceanspray thickets, Oregon white oaks, pin cherries, and Rocky Mountain maples. We watched cliff swallows dance along the andesite walls and outside the old train tunnels. Above us in the crisp blue sky bald eagles soared. One even flew above us with a snake in its talons and a redtail hawk and juvenile eagle giving it chase.

We stopped at the confluence of the Teanaway and Yakima Rivers, knowing in less than a week we’d be hiking in the headwaters of the Teanaway. We even had our first cow sighting of the trail near the Teanaway confluence! Cows = Now, I know I’m on a long-trip.

Before 10 am we were in Thorp at the Fruit and Antique Mall close to I-90. Definitely a spot we could have counted on for a resupply with so much fruit, nut, cheese, and chocolate selections. An oasis for a hungry, thirsty traveler. Knowing our day was still on the easy side of what we needed to do – we opted for cold water and fresh fruit before peddling on into Ellensburg.

In town by noon, it was time to get to the business of reaching the southernmost point of the Greenway up on Manastash Ridge. With another warm day and and a 1,200 foot climb (in a steep 3 miles) ahead of us, we opted for another fruit and cold drink stop at Fred Meyer. I got a container of cold, delicious watermelon. It was refreshing and my favorite food of the trip so far (even Trail Butter can’t compete). Then we headed up the road.

Ellensburg is awesome for riding around with bike lanes, sharrows, and great cycling on the outskirts. The catch is that in the summer time it is hot (thankfully it was in the 90s today vs 105 degrees like it was three days ago) and it can be WINDY. We took it slow and steady peddling up Umtanum Road up, Up, UP into Shushuskin Canyon, then up onto dirt roads to get as close to the southern point of the Greenway as we could. We settled for the southernmost point of the gravel road in a parcel designated as WDFW-owned land on our maps. We would have needed to cross private property to get to the true southernmost point. We were about 2,000 feet away from that point – but standing on public lands. Close enough!

The views from Manastash Ridge are some of my favorite in lower Kittitas County. The ridge spans about 50 miles and is an anticline that rises from around Ellensburg and runs east-to-west into the Cascade foothills. The view from the southernmost point showcased the Stuart Range rising above Ellensburg, the bright green hay fields of Kittitas Valley, and the golden foothills of Table Mountain. Beyond the spinning windmills, the Snoqualmie Range rose on the horizon, framed by puffy clouds. Rainier (Tahoma) peeking out above the Taneum and Cle Elum hills. After all the huffing and puffing up the hill to get here, it was worth it to stand on the edge of sage brush hills and take in the views.

The ride down was fast, but at times with the headwind we still had to peddle downhill. We decided to rest in the shade with a picnic table at Irene Rinehart Riverfront Park admiring the Yakima River. Then we took another watermelon and juice break at Fred Meyer before heading over to Steve and Anita’s to drop off our gear. The day wasn’t done, but at least we wouldn’t be pushing our drybags up hill in a headwind to get to the easternmost point of the Greenway.

After a quick visit with Steve, we saddled up and began the long, slog up Wilson Creek Road to the eastern-most point of the Greenway. The grade isn’t steep for the 1,000 feet gain and 9-ish miles, so it could be an easy ride. But oh the headwinds! Gusts close to 30 mph pushed us sideways and humbled us. The ride was a slog in low gears. I watched the wind push Gabriel in front of me such that he was leaning sideways, the wind trying to knock the tires out from under him. We were working hard to go about 6 mph.

We kept heading up toward the BPA power lines at the base of Table Mountain, left the pavement and pushed up bumpy, rocky Wilson Creek Road to the eastern-most point. At last!

Sagebrush and antelope bitterbrush on the edge of the Columbia Plateau such contrast from the saltwaters of Puget Sound and its forested shores. Both so beautiful!

We looked around, took some pictures, got on our bikes and peddled back in the wind (those sidewinds!) to Steve and Anita’s place. It was good to catch up with friends and meet their adorable new kittens.

Steve and Anita are some of our most inspirational mountain buddies. They are also skiers, ultra runners, and long-distance cyclists. We aspire to be them in future years. And they are among the handful of our non-thru hiker outdoor friends who think our long-distance treks like this one are cool. (So many of our climbing partners tell us we’re crazy.)

Steve told us a few stories from biking across the country (4 times!) of being in one of the Dakotas on a day with ridiculous headwinds. He and his buddies barely made 30 miles that day and stopped early due to the fierce headwinds. The next day they had a tailwind and rode 130 miles. It’s not the mountain climbs that are challenging on a bike ride, it’s the wind. We appreciated the perspective now having an idea of the winds ourselves.

It’s a good thing tomorrow we only have a 5,200-foot gain day. Oh, but we’ll be riding toward the windmills before we really stare the climb up Reecer Creek Road to Lion Rock with winds around 24 mph. More headwinds. Ouch. Time to get to bed. 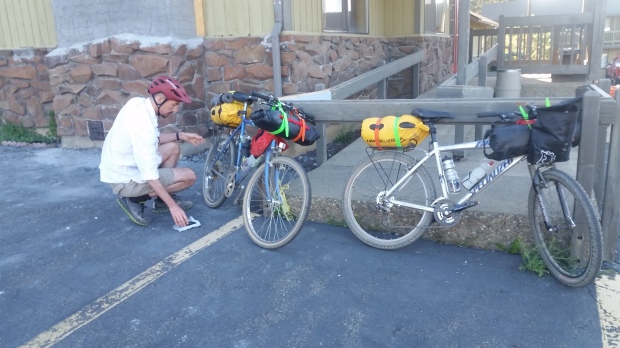 Outside the Stewart Lodge in Cle Elum greasing up our chains and getting ready for Day 4. 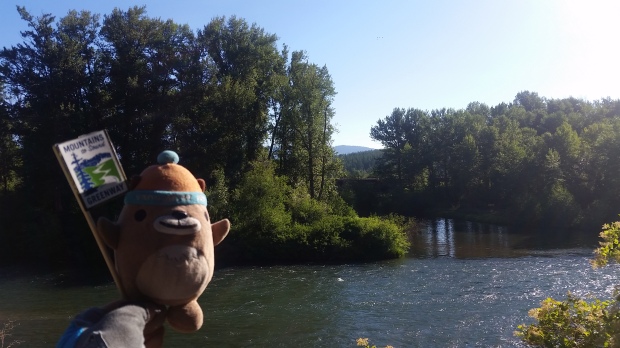 Mukmuk is happy to be at the confluence of the Teanaway and Yakima Rivers.

Cool andesite cliffs along the Yakima River. I thought these were basalt but one of our geologist consultant friends helped with the identification. It’s good to know geologists! 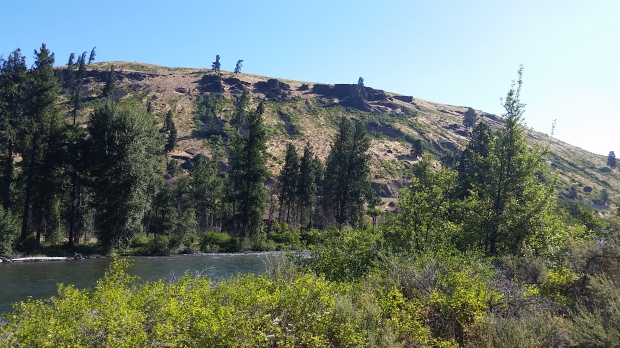 Andesite outcroppings and grassy bluffs above the Yakima River. This section sure would make a fun float trip.

Gabriel riding along the Palouse to Cascades Trail and the Yakima River. 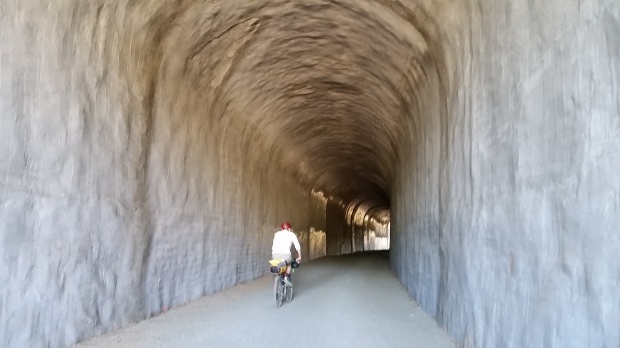 Inside one of the rail-trail tunnels.

The picturesque Kittitas Valley and the pleasant sight of cows eating grass in a pasture. Evoking a need to sing the lyrics of my favorite trail song: “Everything is better with some cows around/Living in town sometimes brings me down/Let me bestow this western blessing and share what I have found/May you always have cows around.” Thanks Corb Lund for writing my favorite song and playing it for me at the Tractor a few years back. 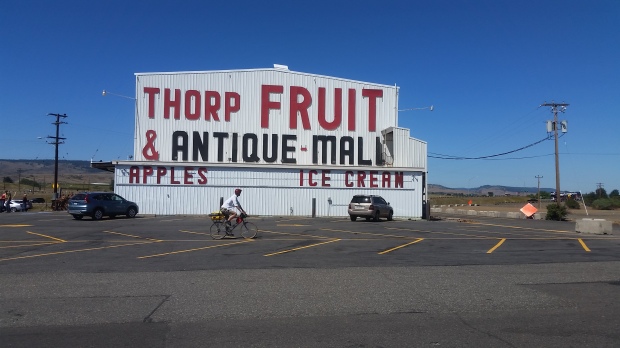 Gabriel heading out after our snack break at the Thorp fruit stand. I’ve long wanted to stop and check this place out. Produce deliciousness!

Mukmuk at the southernmost point of the Mountains to Sound Greenway. It was hot and sunny, so I couldn’t tell that my camera lens was covered in grime.

Nobel Gabriel at the southernmost point.

The fast moving Yakima River along the shores of Irene Rinehart Riverfront Park.

Gabriel riding up to the easternmost point of the Mountains to Sound Greenway on Wilson Creek Road.

Mukmuk at the easternmost point of the Mountains to Sound Greenway – off of Wilson Creek Road in Ellensburg. It’s mostly sagebrush, bitterbrush, and bunch grasses, sage sparrows, and a few sage trashers around these parts.