The trip begins! We headed out to the westernmost point of the Mountains to Sound Greenway which happens to be West Point in Discovery Park. A park close to home and our favorite spot in town to take a break from the work-a-day world. It’s where we regularly go to admire seals and river otters, encounter voles and mountain beavers, cheer on pileated woodpeckers, dodge barred owls, pick berries, enjoy three volcano views, admire the Olympic Mountains, walk a beach, and take in the changing seasons.

Since this trip included a walk along Puget Sound, we planned our start day to coincide with a minus tide. Sunday was one of the lowest tides of the year (> -3 feet). The Sound, known as Whulj in the Lushootseed language of the Native Salish peoples means saltwater or “the saltwater we know”.

Each time I take a low tide meander around Discovery Park, I feel I become a little more familiar with and a lot more in awe of the Sound. Low tides in the summer time expose eelgrass beds and tide pools of the upper splash zone, revealing the world of red crabs and surf smelt, ochre sea stars, geoducks, and sea cucumbers. These extended shorelines rich in marine life reward the gulls, herons, and bald eagles who comb the sandy shores with plentiful meals. With every step there is a reason to pause, look around, and be impressed by the foodwebs of this dynamic ecosystem. Low tide walks are ones for ooh-ahh pace.

When we got to West Point by the lighthouse, we sat and enjoyed a cool breeze off the water – much appreciated on a hot day. In the few minutes we sat at the point, a common tern dove into the water and caught a fish and a minute later an osprey flew over us with a sand sole in its talons!!!!! We also watched two juvenile bald eagles hangout with a meal of some kind. It was a feast day for the sea birds!

I also appreciated that the first day of our trip started from our front door and went out to the West Point Lighthouse, the destination for the first local outing The Mountaineers organized by the club in February 1907. Knowing this feels like one more connection to the place and community that inspired the route we’re beginning in earnest on Monday.

After reaching the westernmost point of the Greenway we walked more of the shoreline on the north side of the lighthouse and took some of our favorite trails through the park out to Magnolia and ran back over and up Queen Anne to home.

Gabriel runs through the Snoqual arch created by Native American artist and story teller Roger Fernandes. This arch is at the start of the overpass that connects Lower Queen Anne to Myrtle Edwards Park. Tomorrow we’ll bike to the place that is central to the origin story told on the panels about Moon and the Two Sisters.

Running along the Elliott Bay Trail in Myrtle Edwards Park, we can see the tide is getting low. 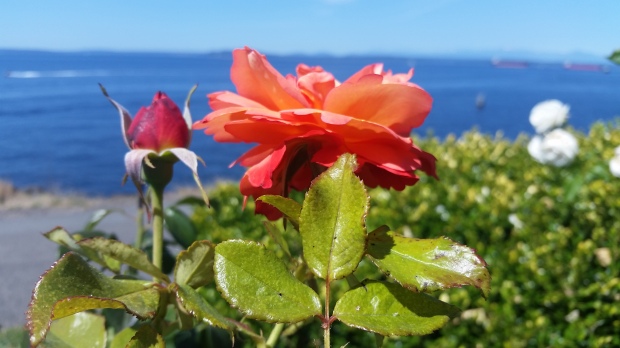 We made sure to take time to stop and smell the roses in the parks along the trail. 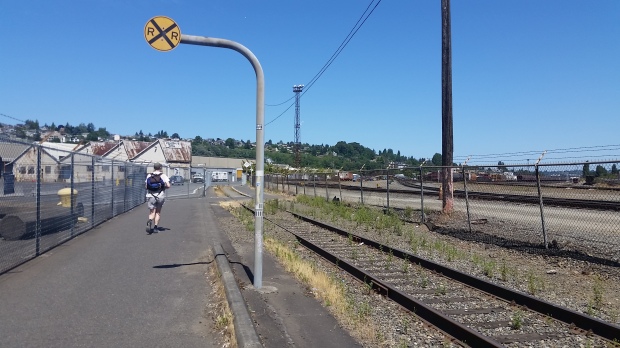 Running in between the BNSF tracks on the Elliott Bay Trail. 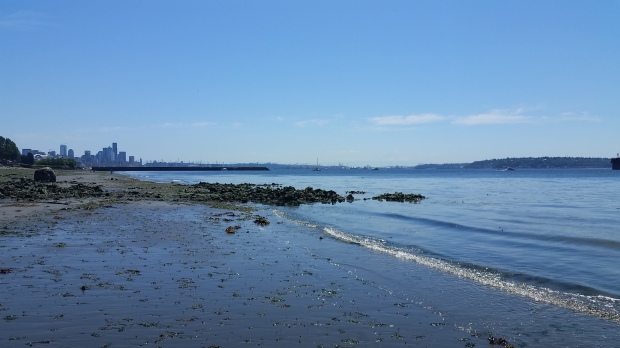 Looking back toward downtown. Already, the city feels worlds away. 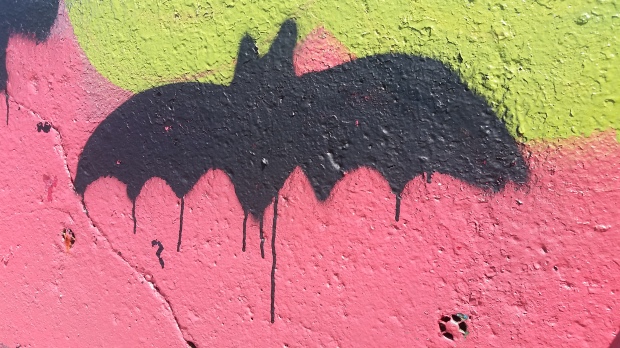 Cute bat graffiti on the ever changing concrete slab down by the water. 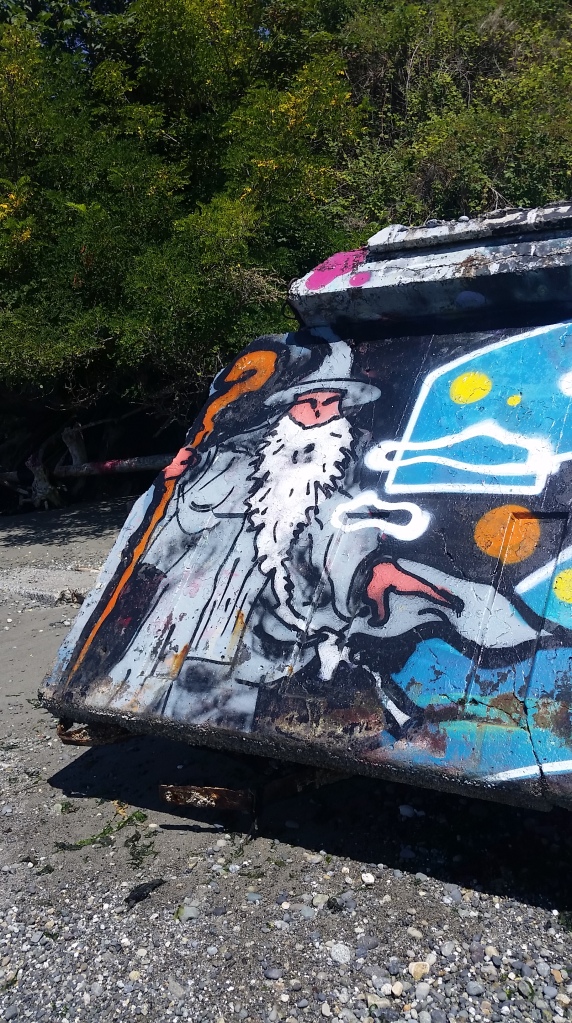 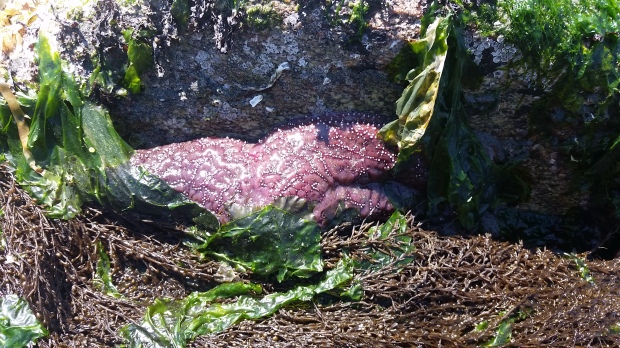 Ochre sea star – it’s good to see them again! There were fewer sea stars around here the last few years. 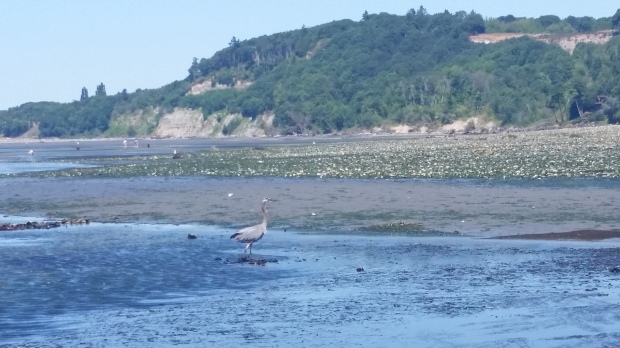 A great blue heron foraging in the eelgrass beds below the bluff at Discovery Park. It also caught a fish! 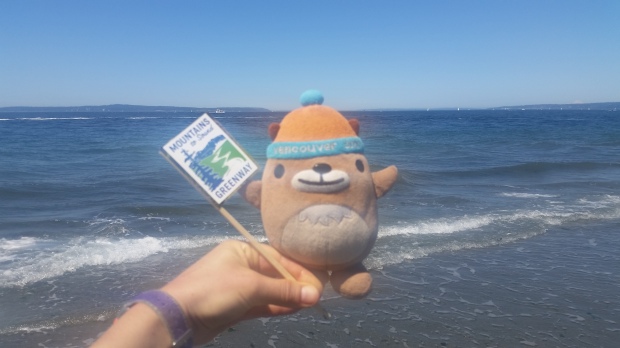 Mukmuk at the westernmost point of the Mountains to Sound Greenway near the West Point Lighthouse. Looking northwest across the waters of Puget Sound (Whujl) to Kingston, Whidbey Island, Carkeek Park and distant Mt. Baker (Kulshan).