We didn’t know what to expect of the land between Colorado City and Zion National Park. All we knew is it was going to be a hot day (mid-90s (F)), across dry country, and we wanted to make it to the East Fork of the Virgin River.

Hiking in the morning up Squirrel Canyon to the ridge connecting to Canaan Mountain, we were delighted by the groves of oak, gardens of maidenhair fern, monkey flowers, and columbines. We were in awe of the Navajo sandstone domes, ridges of slickrock, waterpockets, slides, and the ever determined ponderosas, pinyons and junipers growing out of cracks in the rocks. The Canaan Mountain Wilderness is a wonderland tucked between Zion NP and the communities below the Vermillion Cliffs.

Hiking in the morning up Squirrel Canyon we were also surprised and disappointed to see used water bottles, soda cans, used toilet paper, and other trash along the trail. Once on the ridge and the pack trail, instead of horse apples we found tire tracks, old tires, a tire in a tree (Daybreaker wisely took a picture!), and water bottles strewn about. This beautiful place of slickrock and close to town trails brought to mind the old days of the Middle Fork of the Snoqualmie River. Twenty-five years ago the little valley just outside of North Bend, WA was a dual outdoor destination and mess: white water rafting, alpine fishing, iconic local climbing, and trails into the heart of the Cascades. It was also home to rogue camps littered with old televisions, refrigerators, shotgun shells, and a sense of anything goes. Today, it is a valued and (perhaps overly) popular destination for wilderness enjoyment and outdoor pursuits. In the coming years, I hope the Canaan Mountain Wilderness can turn a course and be stewarded by BLM and its surrounding communities in a way the messes with its wilderness status.

Walking amid OHV tracks on a sunny Wednesday morning amid the slickrock and looking north to the hollows, we thought this may be a day with no people. Over the course of this trip, all but one or two days we have encountered people on the land: recreationists, folks working, and people driving the roads in what others describe as remote places (if there’s a road, it may be a long ways to “civilization”, but it’s not remote by my standards). A quiet Wednesday morning, we thought this could be the day.

And then we heard a car horn blaring across the ridges. What? What is that? Here? Why?

We turned out of the wash and followed our route up a steep, rocky ridge. One with several drops over a foot. The ridge was more of a scramble than a pack trail. It was a pack trail on our maps, but there was evidence of some OHVs. Up the ridge we went a few hundred feet. Then the horn got loud. And then to our surprise we saw a Ford Ranger truck coming down at us. What the…?

The family: father, teenage daughter, young teen son, and little toddler daughter were coming down the ridge. They were way off route from the family camp out they’d been trying to reach elsewhere around Canaan Mountain. It sounded like what would have been a fun family outing had morphed into the start of a made-for-TV-wilderness-gone-wrong-survival-special.  Cell service non-existent in this little valley (okay it is somewhat remote), we got out our InReach and helped them send messages to family. Gabriel tried to answer the father’s questions as best he could. But we didn’t know of road routes out of the wash they were driving down, because technically there aren’t any. We gave them one of maps and noted the route they could walk out if needed.

We were impressed. This was a potentially stressful situation (it was barely mid-morning and already hot). The oldest daughter was thinking through logistics, keeping her little sister happy and giggly. The son was out of the truck scouting the route for clearance. And their dad was oh so calm in this situation. We got their messages sent and they were eager to be on their way. We were wanting to going and cover the sandy miles before it got too hot.

Continuing up the ridge, were blown away at what they had come down and understood why they didn’t just turn around. The rocky ridge was steep and felt very committing in places. They’d gone down this? How can that truck possibly get back up it? Wow.

Later, Gabriel followed up with the family and found out that they had had to go back up the way they came down. Wow. It took a very long time. But they made it. We were so happy they didn’t become a survival TV story. Next time they go out for a family camp out, I hope they have directions, a map, some sort of navigation system.

In the time that we stopped on the ridge it was noticeably warmer. We hiked on. Sweating. Imagining the cool water of the river. Only 12 miles a way, mostly on roads. Our minds somewhat calibrated to the easy travel across the Strip, we had hope of getting to the river in the early afternoon. Then we got out of the wilderness and into the sandy wash of Broad Hollow. This wasn’t going to be cruiser.

Sand walking. It is the Hayduke after all. We unfurled our umbrellas and kept hiking. Taking breaks in shady places from time to time. We kept slowly going. Following sandy roads, some bits of cross-country. Our water heating up to more than tepid as we hiked on.

Late in the afternoon, we finally descended down Rock Canyon to the East Fork of the Virgin River. Relief! A grove of cottonwoods providing shade along the stream. We cooled off. Gabriel laid down directly in the river. We ate the last of our kale and cream cheese before it went bad (hikers don’t have food handlers card standards). And just soaked in the peaceful beauty of this little grove.

Instead of hiking on, further into the narrows of The Barracks with fewer camping options, we decided to take it slow for the rest of the day.

We camped at the mouth of a little spur narrow just across from Rock Canyon in a spot cowboys and other had enjoyed before. We explored around the sandstone. Listened to canyon wrens. And marveled at the contrasting worlds between the top of the canyon and down here by the river. Up on top the world was slickrock and sand. Ponderosa, juniper, pinyon, blackbrush, and prickly pear growing in a well spaced garden amid the breaks in the sandstone. Spacious, red slickrock, blue sky, and a fierce sun. Down here it was a lush world of cottonwoods, clematis, oak, single-leaf ash, spiderwort, scarlet gila, blanket flowers. Thick with vegetation, walls of red rock, slivers of blue sky, and gentle breezes wafting down the narrows.

Enjoying the sounds of the river. It was a beautiful places to take it slow and linger.

I’m not sure I ever need to walk the sandy hollows between Canaan Mountain Wilderness and The Barracks again, but are grand destinations that I’m glad the Hayduke has introduced us to.

GPS: not needed; people sighted: a family of four and their Ford Ranger; roads: some very sandy roads and pack trails and washes that OHVs treated like roads.

Up the Squirrel Canyon trail we found tire tracks, garbage, and water retention projects. It also had a beautiful gable oak and serviceberry woodland with flowers and peakaboo views of the Navajo sandstone domes above.

The Beehive. We kept looking at the dome and slabs of sandstone and trying to find a nice scramble route. Apparently there is one that is Class 3. Next time!

Walking the “pack trail” in Canaan Mountain Wilderness. ATV tracks, water bottles, soda cans, and tires found regularly along the way. Normally I pick up trash along the trail, but there was so much trash and this was more of a road. Still, this area is beautiful!

Canaan Mountain Wilderness is filled with slickrock benches, sidewalks, potholes, and colorful domes of Navajo sandstone. We were in awe of this little pocket wilderness on the edge of town and in Zion’s backyard.

Chipmunk tracks! These were more fun to find along the way.

This little Ford Ranger was on an unexpected adventure. I wonder how it fared its exit route. 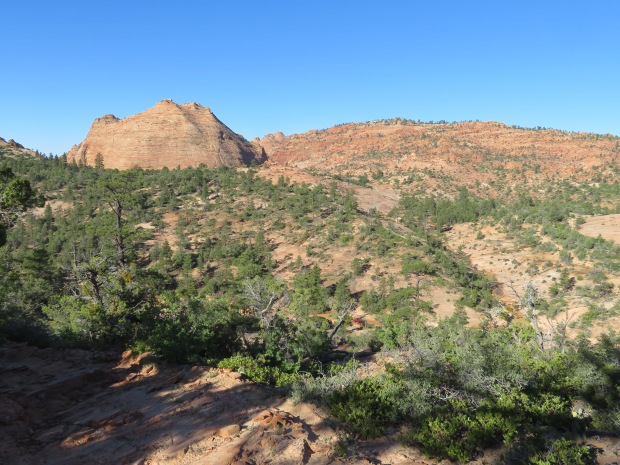 The Beehive, Canaan Mountain, and the pack trail used by OHVs.

Umm… do the folks around here know about the wilderness being closed to motorized use? It sure doesn’t look like on the otherside of this fence.

Once out of the slickrock dome world, it was into the realm of crossing hollows via sandy, sandy, sandy roads in the sun. Our umbrellas have really earned their due in the last 100-some miles of the route.

Sandy roads mean lots of sand in the shoes.

After hours of hot sandy road walking, we are getting views of Zion’s Checkerboard Mesa! Somewhere down there is the East Fork of the Virgin River. Water and canyons, here we come.

For days now (since not taking a swim in the swimming holes of Kanab Creek), we’ve talked about getting to the Virgin River and just lying in the waters. When we got down to the bottom of Rock Canyon’s confluence with the East Fork of the Virgin River, Gabriel took his hat, sunglasses, and shoes off and laid down in the river. Clothes kinda laundered after nine days of dust and sweat. The water felt VERY refreshing. 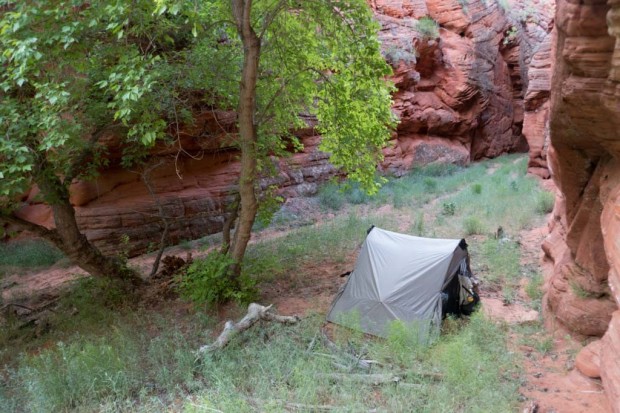 Our camp across the way from Rock Canyon near the entrance of a little narrows. Cowboy camping was oh so tempting, but the bugs were out. Signs it’s getting late into spring.